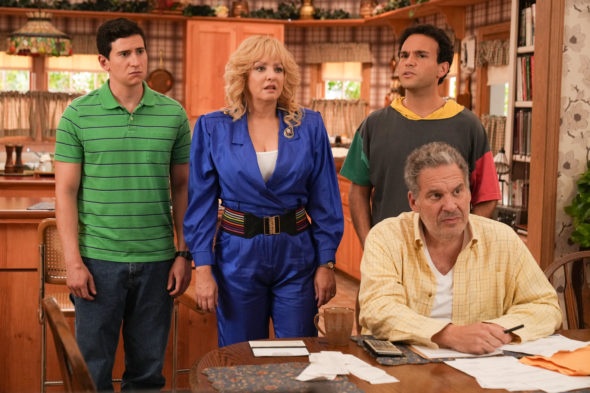 Airing on the ABC television network, The Goldbergs stars Wendi McLendon-Covey, Sean Giambrone, Troy Gentile, Hayley Orrantia, Sam Lerner, Jeff Garlin, and Patton Oswalt (voice). Set in Jenkintown, Pennsylvania, and loosely based on the experiences of series creator Adam F. Goldberg, this comedy looks at life as seen by a young man growing up in the Goldberg family in the 1980s. Youngest child Adam (Giambrone) is obsessed with movies and spends his time documenting his colorful family’s ups and downs. Mother Beverly (McLendon-Covey) loves to take care of her family and meddle in their lives while father Murray (Garlin) parents from the comfort of his recliner. Eldest child Erica (Orrantia) dreams of being a pop star if she can only overcome her secret love of all things uncool. Meanwhile, middle child Barry (Gentile) can be emotionally clueless and his best friend, Geoff “Madman” Schwartz (Lerner), is engaged to Erica. In the ninth season, the family pays tribute to their beloved Pops (George Segal), Erica and Geoff plan their wedding, Barry is eager for his pre-med future but struggles to let go of the past, and Adam is itching to graduate high school and study filmmaking in college.

The ninth season of The Goldbergs averaged a 0.54 rating in the 18-49 demographic and 3.15 million viewers. Compared to season eight, that’s down by 15% in the demo and down by 10% in viewership in the live+same day ratings (including DVR playback through 3:00 AM). While these numbers don’t include further delayed or streaming viewing, they are a very good indicator of how a show is performing, especially when compared to others on the same channel. There can be other economic factors involved in a show’s fate, but typically the higher-rated series are renewed and the lower-rated ones are cancelled. Find out how The Goldbergs stacks up against other ABC TV shows.

Will ABC cancel or renew The Goldbergs for season 10? The show has done well for the network but nine years is a long time for a family sitcom. I suspect that, despite the ratings, either season nine will be the end or, it will be renewed for a 10th and final year. I’ll update this page with breaking developments. Subscribe for free alerts on The Goldbergs cancellation or renewal news.

What do you think? Are you glad that The Goldbergs TV show has been renewed for a 10th season? How would you feel if ABC had cancelled this TV series, instead?

I love this show! Barry is my favorite! I hope there is another season of laughs!

Of course we want “The Goldbergs “ renewed. It’s funny, ingenious and heartwarming. Isn’t that what the world needs now???

I’ve enjoyed over the years but has lost its steam the last year( sad to say) kids are grown and no story line. It’s time to end. Mary lou

Good show, but pretty much out of gas. It’s time to end it.

We have enjoyed the Goldbergs very much the first episode I saw was 2016 it was the dirty dancing episode they nailed it is still my favorite we will miss the show . But I’m a big rerun person and there will be over 200 episodes . Thank you

Not sure how it will work with Murray MIA, and Adam off to NYC…the other 2 kids are going to school locally, so can always be on Mama’s radar or visiting the house…not sure how that will work keeping Adam in the loop. Too bad Jeff G ended up being a jerk. He was spot on as the uninvolved sarcastic Dad. I would probably keep watching if they renewed it, but stop if the premise behind the show jumped the shark too much trying to cover no Murray and a distant Adam.

I hope the Goldbergs show goes on

This show is amazing! The acting is fabulous! The whole staff even behind the scenes make me feel like I’m actually still in the 80’s. And being a child in the 80’s, I can really appreciate this show!

I always watch the day after on Hulu as convenient so hope they will count all the people streaming this show. It is my favorite!

I love this show..I hope to see season 10

Please reconsider it all look forward new episodes every week . Never missed any episodes of it this show so funny and love it and enjoy it. Such a great cast too.

Please Boost your ratings so good never missed any of episode it. Look Forward to seeing it every week enjoy it and love it. so good great cast too. Jeff Garlin best comedian on this show Beverly Goldberg classic one liner.