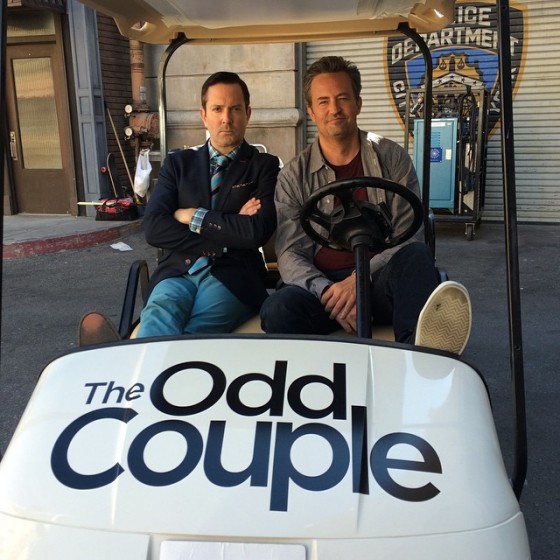 On CBS’ version of The Odd Couple, endearing slob Oscar Madison (Matthew Perry) is a sports-writer and uptight neat freak Felix Unger (Thomas Lennon) is a photographer. They’re two former college buddies who become unlikely roommates after the demise of their marriages. Other castmembers are Lindsay Sloane, Wendell Pierce, and Yvette Nicole Brown.

Airing on the night of the Two and a Half Men series finale, the newest Odd Couple debuted to a very healthy 3.1 rating in the 18-49 demographic with 13.57 million viewers. In week two, the numbers fell by 10% in the demo and 18% in viewership. In week three, the ratings grew a bit.

The fourth installment hit a new low with a 2.5 in the demo and 10.24 million. Last week’s took a big dip, hitting another new low with a 1.9 demo rating and 8.7 million. It’s worth noting that all of the CBS shows were way down last week.

While it seems that Odd Couple’s ratings haven’t quite settled in yet, it appears that the sitcom is a safe bet for renewal. If the numbers continue to go way down, it could be headed for cancellation but that doesn’t seem likely.

In short, CBS still needs new sitcoms. The McCarthys will surely be cancelled and they dropped The Millers midway through its second season. They’ve already renewed four comedies for next season so that leaves them with two half-hour timeslots open for 2015-16 (and that’s presuming they don’t want to add more sitcoms back into the schedule).

While Odd Couple’s ratings retention from its Big Bang Theory lead-in could be a lot better, the new series is currently the network’s second-highest rated show in the demo. It doesn’t hurt that it has a couple name actors in the cast which helps sell the series to new viewers (can a mini-Friends reunion be far behind?). Renewal looks like a safe bet.

But, what do you think? Do you like The Odd Couple on CBS? Would you like to see it cancelled or renewed for a second season? Would you make any changes?

Renew the show for a second season, but bring their exes in from time to time.
Oh… and Oscar’s bedroom… should really be a colossal mess…….

This is like watching wood warp! Any show that loses 1/2 it’s audience in just 3 months is not going to survive a full second series! Don’t forget The McCarthy’s dropped from 8.08 to 7.11, so lost just under 1 million. The Odd Couple started with over 13 m (based SOLELY on the original series). Since then it has consistently dropped to now to 7.03m! If the McCarthy’s was cancelled with HIGHER ratings, I cannot see hoe the Odd Couple can or indeed should get a 2nd series! Never thought a show could be worse than the McCarthy’s. I have… Read more »

i love this show….and i think it must be continue

I love the show a lot and all’s I got to say is, It had better be renewed or I’ll think about ending my life! Well it wouldn’t depress me to quite that level but I really love the show a lot! My 2nd fav. sitcom behind Mom and Mike & Molly! Totally burnt out on 2 and a 1/2 Men so thank God thats gone, but also Big Bang Th. needs to go and lately CBS has been showing it twice on Thursday prime time? Why? Once is too many times as far as I’m concerned! But twice, once… Read more »

keep please the show is funny this is the first show since friends that i love to watch Matthew Perry in, he is funny they both are. a good clean comedy is what we need more of. this is one of them. they took off the millers and mccarthys and others that was funny and watchable without worrying about what bad things is going to come out of thier mouth. good shows that we can watch with families.

I LOVE THE ODD COUPLE!!!! But i think matthew perrys oscar needs to be alot more sloppy,. It needs to be renewed.

I’d like to see the show being renewed for a 2nd season!

Love this new Odd Couple and especially Thomas Lennon! He is just amazing and makes us laugh so hard!!

I would cancel this version and create a version that breathes some life into this tired formula. First, I would make Oscar a gay Asian, say Daniel Henney or John Cho. A gay sports blogger is more contemporary would get rid of the stale gang of unhappily married guy jokes. Second, I would make Felix straight, but more in the mold of Jon from Don Jon (and Joseph Gordon-Levitt really is the model here). Tone down the fussbudget nelly straight guy and go more for the control freak neat guy. The tension isn’t between someone who doesn’t own a vacuum… Read more »

The original Odd Couple was good. This new version is horrendous. I’d rather listen to nails scraping across a blackboard than listen to the Felix character. Oscar just yells lines, making him unbearable to watch as well. I don’t know who thought this was funny.

I totally agree, this show is absolutely horrible and it’s so miscast . Perry seems lost and doesn’t even appear to be sloppy at all , London is just trying to do Tony Randall all over again but is much more feminine . Oscar and Felix should have been David Foley and Neil Patrick Harris.

> Oscar and Felix should have been David Foley and Neil Patrick Harris.

The characters are supposed to be childhood friends. Foley is 52 (but looks older) and NPH is only 41.

Matthew Perry need some comedy acting lessons…he’s trying WAY too hard! It’s as if he yells the one liners at everyone thinking they’ll be funnier.
Just scale it back some and maybe it will be a little bit more natural.

Yeah, I’ve thought the same thing with Mathew Perry yelling the jokes! It doesn’t seem natural. I still like the show though.

I think it’s a keeper. I watched the original and I think that Matthew Perry and Thomas Lebbon are perfect replacements.

Oscar is not even messy! His room looked normal! They need to stick to some of the foundations of the characters. Felix is overdone and Oscar is just an older Chandler.

I really like Mathew Perry but this is NOT the show for him! It’s been done! He needs something new and refreshing, I just can’t get with the characters. It was different with the old Odd Couple as Tony Randal came across as being Gay which was a no, no in those days. Now being gay is NOT SOMETHING NEW!