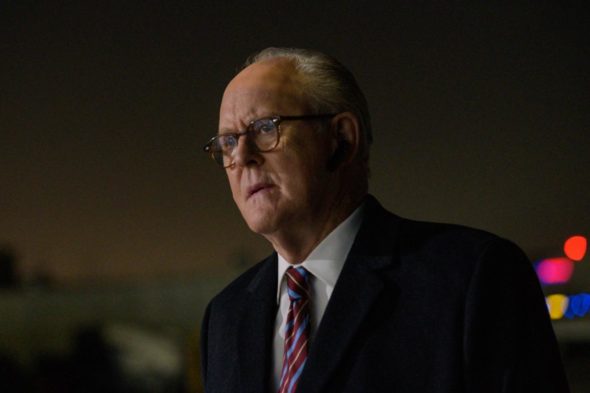 How long can Dan Chase run? Has the The Old Man TV show been cancelled or renewed for a second season on FX? The television vulture is watching all the latest cancellation and renewal news, so this page is the place to track the status of The Old Man, season two. Bookmark it, or subscribe for the latest updates. Remember, the television vulture is watching your shows. Are you?

Airing on the FX cable channel, The Old Man TV show stars Jeff Bridges, John Lithgow, Amy Brenneman, Alia Shawkat, and Gbenga Akinnagbe. The story revolves around Dan Chase (Bridges), a former CIA operative who absconded from the agency decades ago and has been living off the grid ever since. When an assassin arrives and tries to take Chase out, the old operative learns that to ensure his future, he now must reconcile his past. With Chase flushed out of hiding, the FBI’s Assistant Director for Counterintelligence, Harold Harper (Lithgow), is called on to hunt him down because of his complicated past with the rogue fugitive. Working alongside Harper is his protégé, Agent Angela Adams (Shawkat), and Agent Raymond Waters (EJ Bonilla). Julian Carson (Akinnagbe), a highly trained special ops contractor, is sent to pursue Chase as well. While on the run, Chase rents a room from Zoe McDonald (Brenneman). She must draw on reserves she never knew she had in order to survive once she learns the truth about her new tenant.

The first season of The Old Man averages a 0.09 rating in the 18-49 demographic and 813,000 viewers in the live+same day ratings (including DVR playback through 3:00 AM). While these numbers don’t include further delayed or streaming viewing, they are a very good indicator of how a show is performing, especially when compared to others on the same channel. There can be other economic factors involved in a show’s fate, but typically the higher-rated series are renewed and the lower-rated ones are cancelled. Find out how The Old Man stacks up against other FX TV shows.

Will FX cancel or renew The Old Man for season two? To be honest, this feels like a traditional mini-series with a set ending. However, FX hasn’t promoted it as a once-season show. If there’s more story to tell and Bridges is willing to continue playing Dan Chase, I have no doubt that The Old Man will be renewed. I’ll update this page with breaking developments. Subscribe for free alerts on The Old Man cancellation or renewal news.

What do you think? Are you glad that the The Old Man TV show has been renewed for a second season? How would you feel if FX cancelled this TV series, instead?

Want it renewed … Very much!!

How long did the Fugitive TV series with David Janssen last??? Answer 120 episodes. What about “The Black List” 10 seasons!!!! With a good script anything is possible.