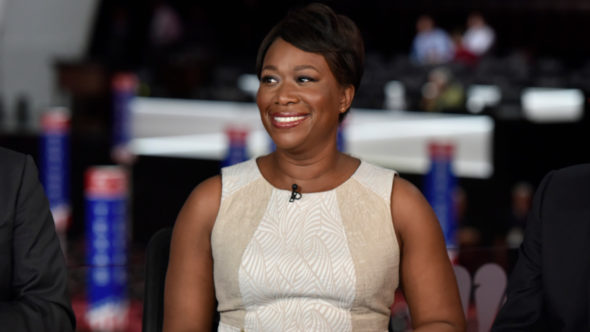 Joy Reid is getting her own show! MSNBC just announced the news anchor will host a new cable TV series called The ReidOut.

Based in Washington DC, the series “will feature one-on-one conversations with politicians and newsmakers while addressing provocative political issues both inside and outside of the beltway.”

The ReidOut premieres on MSNBC on July 20th at 7 p.m. ET.

NEW YORK (July 9, 2020) – MSNBC anchor Joy Reid has been named host of “The ReidOut,” a new weeknight evening program at 7 p.m. ET that will premiere Monday, July 20 on MSNBC.

The Washington, D.C.-based show will feature one-on-one conversations with politicians and newsmakers while addressing provocative political issues both inside and outside of the beltway. Reid, who is also a best-selling author and public speaker, joined MSNBC in 2011 as a contributor. Drawing from her decades-long experience in politics, passion for addressing the intersection of race, justice and culture, as well as her signature tenacious interviewing style, Reid will kick off MSNBC’s primetime lineup by delving into American politics as it unfolds. Tina Urbanski will serve as the Executive Producer.

“I’m thrilled to have Joy on five nights a week,” said MSNBC President Phil Griffin. “She’s thoughtful and brings so much depth to her reporting. She’s made for this moment.”

“I’m honored and thankful for this opportunity,” said Joy Reid. “I’ll always be proud of the work we did on ‘AM Joy’ by pushing the envelope and tackling pragmatic conversations. I’m eager to carry that same energy into the 7 p.m. hour where we can continue to build on bringing in diverse, smart, and accomplished voices to the table on topics that are important to our viewers.”

In May 2016, Reid was tapped as host of MSNBC’s “AM Joy,” which delivered MSNBC’s highest-rated quarter in history for the 2nd quarter of 2020. During her tenure at MSNBC, Reid also served as a regular fill-in host for “All In with Chris Hayes,” “The Rachel Maddow Show,” and “The Last Word with Lawrence O’Donnell” and hosted the weekday show “The Reid Report.” Before that, Reid was the Managing Editor for TheGrio.com, a columnist for the Miami Herald, and producer and host for Radio One. She served as the Florida deputy communications director for the 527 “America Coming Together” initiative as well as a press aide in the final stretch of President Barack Obama’s Florida campaign in 2008.

Reid has covered stories of national and international significance for MSNBC, including the Trayvon Martin shooting, the Baltimore protests following the killing of Freddie Gray, the Women’s March, the Confederate flag debate and removal in South Carolina, the investigation of Black church fires in the South, President Barack Obama’s 50th anniversary commemoration of Bloody Sunday in Selma and the death of Nelson Mandela. She also reported on the Republican and Democratic conventions, primaries and general elections.

Reid recently wrote the New York Times best-seller The Man Who Sold America: Trump and the Unraveling of the AmericanStory.”

What do you think? Are you a fan of Joy Reid? Will you watch The ReidOut?

I was thrilled to hear of Joy Reid’s show and find it interesting and informative. I was disappointed when I didn’t see it in the guide tonight. She had cutting edge guest who answered questions and explained things we were all wondering about. She asked the questions we could not. I will have to find something else to watch doing this hour, but I don’t think it will be the same channel.

I dislike the show. Her style is a total turn off She whines too much.

i am not a fan of joy reid. i don’t find her interesting or a particularly skilled interviewer. i am not thrilled about the show’s format or content either. i was an avid viewer of the last word. i will not be watching this show.

I’m above and beyond excited about Ms Reid’s (showing respect) new show. Hope my 70 year old heart can handle all the energy her show will bring. Five nights a week. Yes!!!

There were so many better choices than Ms. Reid for this time slot, which really should have gone to Nicole Wallace who rules the 4 p.m. hour and deserves to be in prime time. John Hielmann or Claire McCaskill would have been great choices. I do not understand this choice and having watched Reid frequently, whose views border on militant rather than journalistic, on the weekend show, will not be watching the 7 p.m. hour any more. Hello CNN.

i wouldn’t say militant. i would say she allows her emotions to overshadow the journalistic value of a story or guest; and drives her proving to discredit or minimize guests that don’t align with the predetermined course she has chosen.

This is a sad day in not only MSNBC history but also journalistic history. Joy Reid first caught my eye a while back when she filled in for Rachel Maddow and I thought that she did a very good job and on other fill in occasions, seemed to be able to nail politics very well. Then, one day i discovered AM Joy and made a point of watching. Initially, she did a good job of reporting and discussing general political issues but I would find that when it came to anything regarding race/colour/culture or sex discrimination, she would suddenly have… Read more »

Yes,AS part of TWITTERVERSE she’s a GODDESS,A WARRIOR ,and her voice stays with you.. Love her! GR8 !