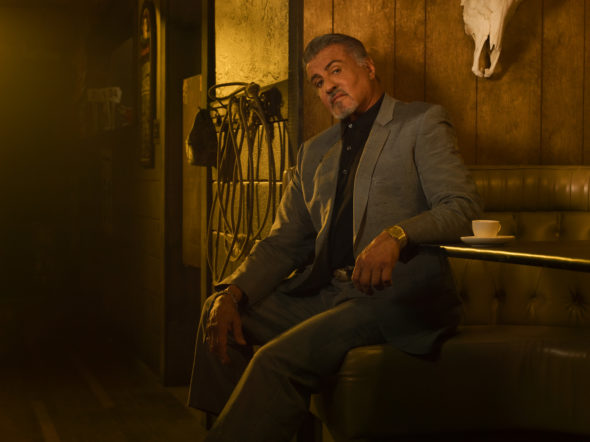 This capo is building a new family far from his hometown. Will viewers want to follow along? Has the Tulsa King TV show been cancelled or renewed for a second season on Paramount+? The television vulture is watching all the latest cancellation and renewal news, so this page is the place to track the status of Tulsa King, season two. Bookmark it, or subscribe for the latest updates. Remember, the television vulture is watching your shows. Are you?

A crime drama series streaming on the Paramount+ subscription service, the Tulsa King TV show stars Sylvester Stallone, Andrea Savage, Martin Starr, Jay Will, Max Casella, Domenick Lombardozzi, Vincent Piazza, A.C. Peterson, and Annabella Sciorra with Garrett Hedlund and Dana Delany. The story follows Dwight “The General” Manfredi (Stallone), New York mafia capo who’s just been released from prison after 25 years. He’s then unceremoniously exiled by his boss to set up shop in Tulsa, Oklahoma. Realizing that his mob family may not have his best interests in mind, The General slowly builds a “crew” from a group of unlikely characters from his new locale. He works to establish a new criminal empire in a place that, to him, might as well be another planet.

Unless they decide to publicize viewership, it is difficult to predict whether Paramount+ will cancel or renew Tulsa King for season two. Given that this series stars Stallone and was created by Yellowstone’s Taylor Sheridan, I think there’s a very good chance that Tulsa King will be renewed. Given the talent behind it, the series may have been quietly given a two-season order right out of the gate. I’ll keep my ears open and an eye out for news, and will update this page with breaking developments. Subscribe for free alerts on Tulsa King cancellation or renewal news.

12/2/22 update: Tulsa King has been renewed for a second season by Paramount+.

What do you think? Are you glad that the Tulsa King TV show has been renewed for a second season? How would you feel if Paramount+ cancelled this TV series, instead?

I have watched the first two episodes and totally enjoy the show. If it keeps up as good it definitely be renewed. Love Sly’s character and his acting.

Look forward to seeing it new series love it .