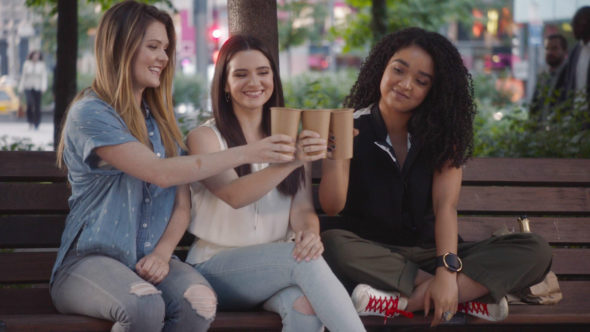 Will The Bold Type be renewed for another season? Recently, Freeform executive Karey Burke spoke with Variety about the future of the freshman TV series.

Even though Freeform has not renewed The Bold Type yet for a second season, it seems likely there will be one. Speaking to Variety, the network’s EVP of programming and development Karey Burke said Freeform is very happy with the response to the freshman series:

We are overjoyed by the critical response, and even more so by the outpouring of love and passion from fans. It’s humbling and inspiring to know that these characters are already touching people in a significant way.”

However, while the critical and fan response to The Bold Type has been largely positive, ratings have not been great for the new series. Overall, season one averaged a .15 rating in the 18-49 demo and only 311,000 viewers, making it Freeform’s lowest-rated series for the 2016-2017 season. Will the network renew the low-rated critical darling or cancel it?

What do you think? Have you seen The Bold Type? Do you hope it’s renewed?

It’s a great show! Love American Idol alum Katie Stevens and the rest of the cast. Stories are just the right mix of humor and drama. Season 2 is a must!

I love this show and tell all of my friends to watch it! I hope there is a season 2!

What I like about this show is that it has many positive moments even though serious topics are touched. It’s not over dramatic, it just leaves a good feeling behind. There definitely needs to be a season 2.

PLEASE RENEW THIS SHOW FOR A SECOND SEASON!

Just binge watched all of season one one Hulu just when I was thinking of canceling Hulu I feel in with this show. Really hope for season 2 to definitely watch on Hulu!!

The show very appropriately portrayed every character’s individual stories and Jacqueline is the women, I would say kudos to, as it is about a real person and how strong she’s been throughout her life, taking control over it and dealing with every issue like a pro.
Season 1 ended with all the right things one was looking up to and some unexpected turns in the life of the characters.
I am really looking forward to the next season.
Hope to watch it soon. 🙂

loooove this show! hoping for season 2!

I really love this show, and most of it was relatable, it’s not a typical show and I would love to see more how this individual characters grow more!

I’m 30 and find this show very relatable. It covers current events without beating them to death. Each character is wonderful in their own way.