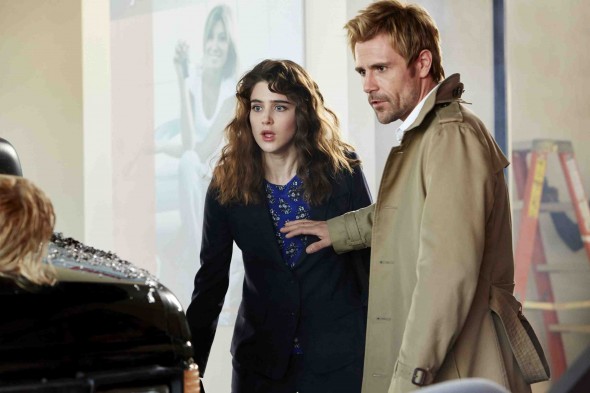 It doesn’t sound like cancelled series Constantine will be rescued by The CW.

Earlier today, showrunner Daniel Cerone tweeted, “Despite ongoing talks I’m told things are not looking up for #Constantine at CW. Don’t have details. Feeling wrecked about it. #Hellblazers”

Six hours later, CW president Mark Pedowitz addressed the rumor that the show will be moving to the network. He said that, “At the moment, it’s just a rumor.” He then joked, “There’s also a rumor going around that I was going to play for the NBA.”

Word is that supporters have until June to save the series because the actors’ contracts will expire at that point.

Somebody please take it already. Ugh. if not then MAYBE Warner Bros. Animation could consider doing a full-on proper treatment animated feature, with Matt Ryan doing the voice work…

that means Warner Bros. would reboot Constantine as a movie and pretend both the TV Series which was short-lived and the Keanu Reeves film from 2005 never happened.

Please save this show. I love this show and the actors. The writing is great as well.

OMG PLEASE SAVE THIS SHOW!! Its so refreshing to find a show thats not about vampires or werevolves, even though I am a fan of The vampire Diaries and The originals. Sometimes you need a break from that kind of drama.

WHO DOES THIS REPORTING?! Lol what a bunch of MORONS! I just saw the commercial for the season opener for the second season of Constantine during the latest episode of Blacklist. Not only is it “saved” it’s even slotted on the air. Just look up tv schedules online. what a bunch of crap. I love websites that do this, I get to add them to my block file under “screw ups”

You’re rude and incorrect. It’s still cancelled. If it’s easy to find on the TV schedule, what day and time?

i would love to see Constantine on the CW. I would even live to see a Constantine/supernatural cross over lol

Ok this show is great! Takes us away to a different world with underlined meaning of the struggles most of us fight everyday. How we can over come them even if we just have one special person.

I need this series to make it! I’m going to cry if it dies. Literally this is the only show out of all the comic-adapted shows we got this season that didn’t get renewed. And it’s the one show I wanted to make it, damn it.

Preach Elizabeth, PREACH! Although I’ a fan of Arrow, The Flash, TVD and The Originals I’ve loved quite a few of the shows that have been cancelled after one season in recent years. The Secret Circle, The Tomorrow People, Witches of East End (at least this had a second season), Ringer and now Constantine…. Constantine is definitely the type of show that can grow if given a chance and someone to believe in it. The Secret Circle was another show that had such a good season finale in that first season , They ended it in a way that would… Read more »

This I getting stupid. I loved Constantine. Its more true to the Hellblazer Comics. Typical network executives not knowing what they’re doing

Ridiculous. We love the humour (albeit black) in this series, and adore the character of Constantine. Instead of producing ‘new’ series, why don’t the networks go back to the system of full seasons;with , at least, 3 full seasons before axing them? Is it any wonder services like NetFlix are becoming more and more popular? Getting very fed up with television.

I am so disappointed to hear Constantine has been cancelled. I’m sick of the good shows getting the axe. I have to say that I agree Constantine would fit right in with CW’s lineup of comic book/supernatural themed programming. I watch mostly CW’s programming because of this and would be just thrilled if they picked up Constantine. Too bad it is a rumor.

CW needs to change its mind. Failing that, some network, somewhere should pick the show up and run with it. It would be good for CW because it’s coming off an obvious horrific miss with the religion-soaked “Messengers” while Supernatural is so long in the tooth and dry in the tank that it’s become a self-parody with the intelligence and energy of a daytime soap opera. Dean has the Mark of Cain… (dramatic music). He’s turning into a demon… (dramatic music). I just don’t care. I haven’t cared for months. I watched Constantine because it was new, exciting creepy and… Read more »

I am also tired of interesting shows getting canceled. Like someone else mentioned supernaturals n Constantine r similar shows n belong on the cw