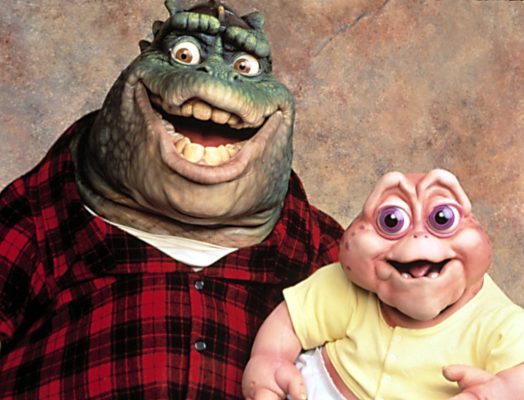 Do you remember Dinosaurs? Star Bill Barretta and his brother Gene are hosting a virtual reunion of the ABC TV show, reports ToughPigs.

On their website, Bill (who did the body work for Earl Sinclair) and Gene Barretta announced they will be reuniting the cast and crew of Dinosaurs in honor of its 30th anniversary. No guests have been announced yet, but the event will stream on June 7th at 4 p.m. ET.

Check out the Barretta Brothers’ website for more info.

6/8/20 update: The reunion was delayed until June 14th due to technical difficulties. The brothers held a pre-reunion Q&A in the meantime.

What do you think? Did you watch Dinosaurs? Would you ever watch a reboot/revival of the series?

Bring it back love this show

Great family show, bring it back!!

“Not the Mama” was
As and still Is said around our house!

Got to love the baby!

I love Dinosaurs, I would happily watch them again. Da da da, dada, dadda daddy, daddy……….
Not the mama hahahaha

i would def watch it, even in highschool i used to wake up 15min early to catch some os it cuz it reminded me of being a kid and wasa still funny AF

GREAT show…..enjoyed it immensely! Would LOVE to see it return!!!!

I have Dinosaurs on Dvd!!! I love, love,love that show!! My 2yr old granddaughter loves the show!! We watch it everynite as were going to bed! I wish they would bring it back!!

I use to love the baby dinosaur hitting his dad and saying not the mommy over and over again….. It was really cute.