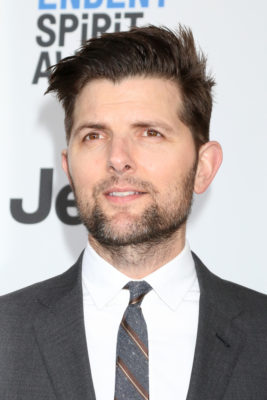 Adam Scott is getting into the game show business. ABC just announced the Parks and Recreation star will host their new TV show, Don’t.

Executive produced by Ryan Reynolds, the game show “is a comedic physical game show that offers contestants the opportunity to team up with their family and friends for the chance to win a cash prize of up to $100,000 by tackling hilarious tasks each with the simple rule of ‘DON’T.'”

ABC has not yet released a premiere date for Don’t, but you can read more info below:

ABC Entertainment and Banijay Studios North America announced today that actor Adam Scott is set to host “Don’t” on ABC. Executive produced by Ryan Reynolds, “Don’t” is a comedic physical game show that offers contestants the opportunity to team up with their family and friends for the chance to win a cash prize of up to $100,000 by tackling hilarious tasks each with the simple rule of “DON’T.” In each episode, members of the four-person team will strive to accomplish various challenges, such as “Don’t Laugh,” “Don’t Blink” or “Don’t Look Back,” as they work together to build their bank.

“I’m very excited to be the host of ABC’s new game show ‘Don’t,'” said Adam Scott. “As a fan of both ‘games’ and ‘shows,’ I feel we may be onto something here.”

Adam Scott is an award-winning actor, director and producer. Known for his role as Ben Wyatt in the NBC sitcom “Parks and Recreation,” he also starred as Derek in the film “Step Brothers” and Henry Pollard in the acclaimed Starz sitcom “Party Down.” Adam can currently be seen in the award-winning HBO series “Big Little Lies,” which was nominated for a 2017 TCA Award for Outstanding Achievement in Movies, Miniseries and Specials. He’s also recurring in NBC’s “The Good Place,” for which he received a Teen Choice Award for Choice TV Villain. This past season, he starred opposite Craig Robinson in the 20th Century Fox TV paranormal-comedy series, “Ghosted,” that his Getting’ Rad Productions also produced. His film, “Fun Mom Dinner,” which he both stars in and executive produced, also through Gettin’ Rad, premiered at the Sundance Film Festival and was purchased by Netflix. He was nominated for the Best First Feature Independent Spirit Award in 2017 and won a 2017 GLAAD Media Award for Outstanding Film – Limited Release as a producer on “Other People,” and was also nominated for Best Actor for his performance in “The Vicious Kind” in 2009. Adam starred in and produced the independent feature, “The Overnight,” which premiered at Sundance in 2015 and was the first feature film produced by Gettin’ Rad Productions. “The Greatest Event in Television History” was Gettin’ Rad Productions’ first project in 2012 and was created, directed, produced, written and starred in by Adam. Adam has appeared in “Black Mass,” opposite Johnny Depp and Joel Edgerton; and “My Blind Brother,” opposite Nick Kroll and Jenny Slate. His other film credits include “Flower,” “The Disaster Artist,” “Krampus,” “Our Idiot Brother,” “Friends with Kids,” “A.C.O.D.,” “Hot Tub Time Machine 2,” “Sleeping with Other People,” “The Guilt Trip,” “Bachelorette,” “Leap Year,” “Knocked Up,” “Monster-in-Law” and “The Aviator.”

What do you think? Are you a fan of game shows? Will you check out Don’t?

OMG, another game show on ABC? It’s Disney!!! Put on some of your movies or old TV shows. The last game shows you put on are awful…. and the screaming woman on Press Your Luck is so loud you can’t even enjoy the program…. We watched this & the other 2 only once.

This actually adds up, Ben Wyatt hosting a game show produced by Deadpool.