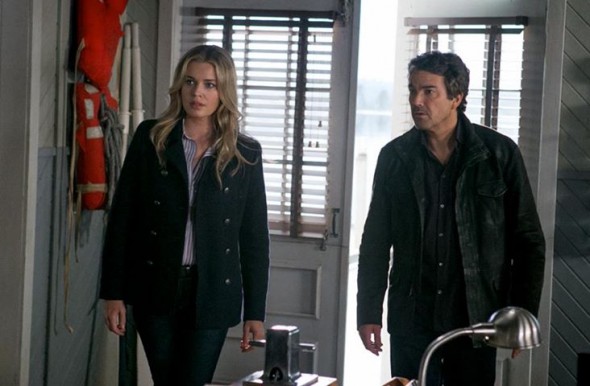 What is TLC doing right that Honey Boo Boo gets 12 new episodes with 3.2 million viewers and somehow a 3.5 million viewer finale from King & Maxwell is not enough for TNT. That’s 3.5 million viewers left up in the air. It would’ve been nice to see the cast progress over time. Such a shame TNT. It’d be nice if TNT would do a few crime drama crossovers. Imagine Rizzoli & Isles working with Captain Raydor and her team to solve a murder in LA and then Flynn and Provenza working with Boston’s team for a double homicide there.… Read more »

King & Maxwell was as good a show as any other of TNTs shows: Rizzoli & Isles, Leverage, Perception. It should have been given another season to become established. It was on a tough nite with a lot of competition.

I’m glad I didn’t watch it. I actually got to watch the pilot, back in February, by being a member of the TV(inner)circle. I didn’t find it to be anything special honestly. It was OK, but not like Rizzoli & Isles, at all. The two characters didn’t quite the same chemistry, and the pilot seemed really, dull, and unoriginal. Overall, it was decent, but considering the other shows on the network, it was disappointing.

I loved king & maxwell! The characters were great; they played off each other very well. I will miss being able to watch the series.

I enjoyed the characters and the stories and agree with some of the other comments about the TNT not caring and being unable or unwilling to support its decisions or at least not having confidence in them. Are they not able to sell their ads with ‘only’ 3.5 million viewers? Then I suggest they replace their sales and marketing teams instead of their shows.

I just started really getting into King & Maxwell and now the show is being cancelled without a fair shot to improve viewership. Viewership wasn’t great perhaps, but held its own for a summer entry. If TNT doesn’t respect it’s viewers enough to reconsider, perhaps another network will, and reap the benefits of a loyal and flush consumer demographic.

First, The Glades and now, this. What’s next, Covert Affairs? I am a woman of a certain age (not 18-47) and it’s not that often I find shows I like. When I do, they don’t seem to make it. This is getting really depressing. It’s as if we are condemned to reality, watching loser people live out their really weird lives. I don’t want any party of it.

TNT has completely lost it. First LEVERAGE—-big mistake. Now KING & MAXWELL???? It’s a shame, where are we to go for good drama with a little comedy and irony thrown in? The 30 minute sitcoms are disgusting these days. I, for one, am SICK of the homosexual themes being shoved down our throats. At least LEVERAGE & KING & MAXWELL gave us a story and someone to root for. TNT you need to hold on to Rizzoli & Isles and Major Crimes, cause about all I turn to you for anymore—-is reruns!

The show was ok. The best episode was when Christian Kane was a guest. TNT needs to get it together. They cancelled a great show called Leverage ad tried to replace it with some very weak new shows.

I really think TNT does NOT know DRAMA!!! They cancelled a well loved show named #Leverage, on Christmas night in 2012. Replaced it with a very weak, slow show that did not last. They finally get one that compliments the other weekly shows and, once again, cancelled it!!! TNT used to be the channel to go to for fantastic shows, now they are just like the other networks, reality TV rules!! When are the networks going to realize most of the viewers want a great show to get addicted to and follow?? Can’t they read their own FaceBook pages or… Read more »

I loved King & Maxwell and I’m sorry TNT doesn’t have enough faith in it’s viewers. The interaction with all the actors was fun and believable. Why am I not surprised that another series that I really like is being cancelled?!

If they have an opening bring back Leverage. It was a GREAT show for all ages and still had a lot to give the fans.

It was a weak show, but I might have given it another season with a different set of writers.