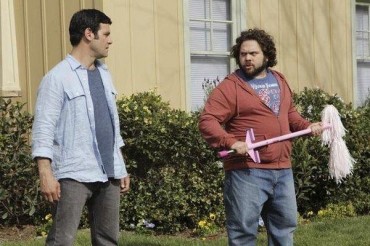 ABC has announced their upcoming mid-season schedule and, not surprisingly, Man Up! isn’t on it. Does this mean that it’s cancelled?

The sitcom debuted to a mediocre 2.4 rating in the 18-49 demographic and 7.78 million total viewers. It lost a significant number of viewers from lead-in Last Man Standing and saw a decline in viewership of 12% between the first and second halves of the premiere. It was in third place for the timeslot.

Week two saw a decline of 17% in the demo, week three fell another 10%, and week three fell another 6%. It seems that the show’s performance has evened off to a 1.7 but that’s just too low for ABC, a network with several hit comedies and more waiting in the wings. Man Up! currently averages a 1.92 in the demo with 6.69 million viewers. It’s the lowest-rated show currently on the network.

ABC didn’t give Man Up! a full season and has now left it off the mid-season schedule. Based on the current schedule, it doesn’t even look like all 13 episodes will even air. New comedy Work It steps in to the timeslot on January 3rd.

The network hasn’t admitted that they’ve cancelled the sitcom but, there’s no way that it’s coming back for a second season. By the time fall rolls around, Man Up! will have been off the air for nine months. There’s simply no reason why they would consider putting more resources into relaunching a show with low ratings.

What do you think? Did you like Man Up!? Is ABC making a mistake canceling this show?

This show is unbelievably funny. I love it, but as usual Channel 7 did it again. They always cancel the good shows and leave the bad ones on forever!

Man up! Is one of the funniest shows I seen in awhile I DVR all the shows. I hope they bring this show back

Love the show. They didn’t promote it at all, that is why it’s failing

Man-Up was my favorite new show to air. I found it to be tremendously funny, much more so than the Tim Allen show (which I also like). The self-deprecating humor of these losers trying to be real men was never boring; in fact, I was totally stunned it didn’t do better in the ratings. This was one of those shows that I said to myself, I can’t wait to get the DVD’s of the series (I suppose I still can, but not quite the same). The episode about the guy addicted to Angry Birds was hilarious. Too bad.

I admit, I was somewhat interested in this show when I saw the previews. But then I saw the pilot of Tim Allen’s sitcom, and hated it. I avoided ABC entirely during that hour from that point on. So (for our house, at least) it was the lead-in that killed it. We presumed that people who thought Tim Allen’s sitcom was good would like that show, so it wasn’t for us. Apparently, that was a BIG mistake by ABC. If they put it with Happy Endings, we’d certainly give it a try.

The show is weak beyond belief. I think if it was NOT paired with Tim Allen as the lead in, it would have never made it as long as it did. There has not been one thing on the show that said original. Yes a few laughs, but the laugh to no laugh ratio is bad. The only guy on the show that sits behind a desk in the show and actually looks like he works, delivers his lines without any pizzazz, it looks like he is trying to play the straight man, yet doesn’t even make it there. His… Read more »

What a shock, the networks are shelving their best new comedy to be replaced by what??? I love Tim Allen, but think he could be paired with a different show. I like the idea listed above about teaming this show with Happy Endings. The two together would be a powerhouse in any timeslot. I have not missed an episode, so of course I have just been waiting for them to cancel the show. I mean the good ones get taken out of the line up, moved all over the schedule, then canceled because nobody is watching them when they are… Read more »

yea funnyguy101
Dan Fogler def made this show and was the only reason i watched it. should have been picked up, but nah. im sure the will opt to go with some corny sitcom with a laugh track
*shakes head in disgust*

This show was funny only because of the fat guy, he was freaking histerical
He should get his own show or something

As I said a couple of posts ago…one less sitcom..is a GOOD thing. The best thing? NO sitcoms. ANYWHERE on ANYONE’s schedule.

Does anyone remember laughter? I guess Bruce doesn’t.

I highly doubt you’re a critic

I’ve enjoyed the show and believe each week it gets better and funnier. I think had it received more promotion prior to it’s debut more viewers would be tuning in. It’s been nominated for “Best New Comedy” on the Peoples Choice Awards and if ABC would give it a fraction of the promos it has run and continues to run for “Last Man Standing” it would have a growing following and larger viewership today.

I can’t believe that they are not picking it up. It’s one of those shows that is really good, but has a miss-matched lead in. I was surprised when I first saw it. It was really funny. I’ve been telling people that I know and when they watch it they agree that it a good, funny show. Its aimed at 30 year old’s but the Tim Allen show before it is aimed at grandparents. I wish they would get rid of Tim Allen and pair it up with Happy Endings or even Modern Family. Executives do not function with logic,… Read more »