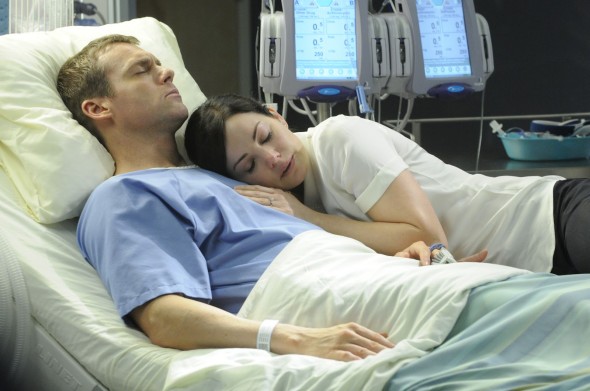 NBC may have cancelled Saving Hope after one season but the medical drama continues to prosper north of the border. CTV has renewed the series for a third season.

They’ve ordered 18 new installments which will bring series’ episode total to 49 episodes. Production will begin in the spring and the remainder of season two episodes will start airing this January. The summer portion of the second season drew an average of 1.3 million viewers.

What do you think? Do you like the Saving Hope series?

Love this show hope we get season 3 in the UK

Yeah, well at least the Canadians have much better execs than the US networks. Great show, great cast. Glad it found a new home and is continuing

Yes I enjoyed the series I hope that CTV will continue it.

I love this show. How can I watch it in the United States? I tried CTV but it won’t let it be seen outside of Canada. I tried youtube but episodes are no longer there. Please help?

I love this show! NBC doesn’t recognize great TV apparently. So happy that CTV does!

I love this show and Daniel Gillies !!!

How can i watch this brilliant series in the UK?

I love this show…after season 2 finale, I can’t wait for season 3!!

Thank God! I just watched the season 2 finale and there’s no way they could end it with that cliff-hanger! Season 3 can’t get here soon enough!

I love this show, but unfortunately I can’t watch it because it was cancelled. I never missed an episode, and then I was left hanging.

This is one of the many reasons I may soon give up on cable and network shows, and switch to Hulu or some other venue to watch shows they give up on TOO QUICKLY.

I love this show and thanks to CTV for giving it a chance. It seems like the folks in the US give up too quickly on their shows and don’t have time for their Canadian counterparts. It’s too bad because their missing out on something special.

Saving Hope is one of those series that takes a little patience and the ability to identify with something other than ones selfishness. That’s why NBC cans yet another good series instead of finding it the right time slot. They choose to put a series like this up against NCIS rather than finding a more benign time where it could live long and prosper. It’s too bad I guess we’ll get yet another news/reality show to bore us to death.

This is awesome. I love this show and shame on NBC for not giving it more of a chance. but I can catch it on the internet.