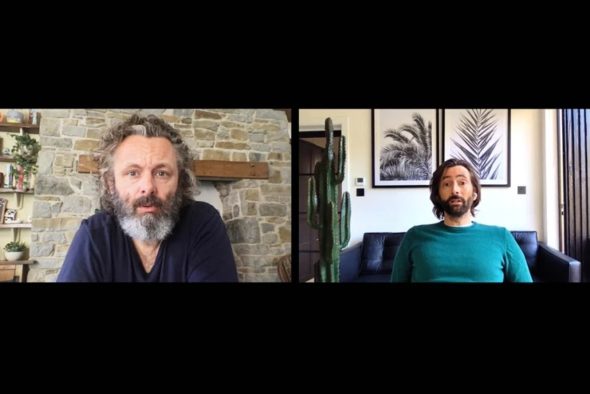 Staged is returning for a third season and the comedy series will have a new home. Episodes will air on BritBox in the UK and likely in the US, as well. The first season of the series was released on Hulu, but episodes are no longer available on that streaming service.

A British comedy, Staged stars David Tennant and Michael Sheen with Simon Evans, Georgia Tennant, Anna Lundberg, and Lucy Eaton ins supporting roles. The series launched during the pandemic and saw fictionalized versions of Tennant and Sheen trying to rehearse a play during lockdown over Zoom. The second season followed “real” versions of the actors coping with the idea that Staged was going to be remade as an American series, without Sheen or Tennant. A New Year’s special was released last December 31st on BritBox’s YouTube channel.

Per Radio Times, Staged will return for a third season on November 24th. The following was revealed about what will happen next in the series:

Things have returned to normal for David and Michael. They have moved on from lockdown and returned to their everyday working life, while Simon’s career remains stagnant. His phone does ring, but only to ask if he can get David and Michael back together; and they’ve made it clear they want nothing more to do with him.

But Christmas is approaching, and Simon hopes the warmth of the season might soften them to the idea of a radio version of a Christmas classic… but that’s as far as Simon’s plan has got!

BritBox also released a teaser about the return of the series on Twitter.

What do you think? Are you a fan of Staged? Do you plan to watch season three on BritBox?