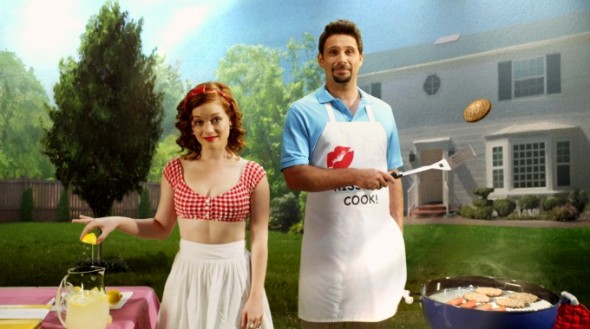 Very sad to see this go. So happy Tesla and Ryan ended it together. All my favorites get canceled. I must have terrible taste in tv 🙁

No you don’t have bad tast. The show’s I like alway get cancelled also. It seems to me that the simple, cute, charming, tastefully funny shows don’t make it as much as the sick, disturbing, Bloody, evil, murder ect. ones do.What does that say about the world we live in?

I agree. I feel the same way, sometimes. I liked the characters and cared about them, especially George, Tessa and Dallas. I would watch it if it moved to a different time slot or station.

Was definitely hoping TBS or someone else would pick it up. …

I LOVE THIS SHOW!! I can’t believe it’s cancelled, I wanted to see what happened between tessa and Ryan! 🙁 I love them two together. So disappointed.. :'(

Yes so happy Ryan came back love them together!

is upset it got cancelled, I don’t watch much of anything because they always seem to cancel the show and as soon as I was finally getting into it, it gets cancelled. there is still so much left unsaid…

Support for Suburgatory! We should all try to do our part to ensure ABC changes their minds. Castle and DWTS along with Shield for another year are good with DWTS being on the reality fringe, but really how long for the Middle and Modern Family. MF is deep in syndication. So if they want that network again? Their audience viewers would get younger and they could keep go actors. “Blash-ish?” One of any of the noted actors got that cherished Executive Producer position also? 5 shows max. #SAVESUBRGATORY or hopefully MTV gets it. Just like Awkward.

ABC has a tendency to shut down shows that are basically critically acclaimed and cancel them for shows that aren’t better. Jane Levy leading that ensemble cast was amazing. This show belongs on MTV much like Awkward. Don’t trust the B, Happy Endings, now Suburgatory. They renew The Goldbergs and the commercial were enough for me not to. Mixology was a smart and sexy show. Now you’ve scheduled Anthony Anderson in a sitcom called Black-ish. They’ve added Tracee Ellis Ross and Laurence Fishburne. Wonder if ABC knows or cares how shows end up on USA, A&E,TNT and TBS and are… Read more »

I am definitely upset that it was cancelled. It was one of my favorite shows 🙁

It’s one of my favourite series! It’s so lovely in its own crazy way.. (please excuse any mistakes, I’m german)

I absolutely love suburgatory and am very sad it is ending so soon.
I would follow it to any channel.

Don’t cancel please .. I’d really love to watch a season 4 . Hopefully with the ending that Tessa and Ryan get back together .. Plesase don’t cancel . 🙁

The first season the show aired it seemed to have promise. By season two the plot lines were so ridiculously stupid it just became painful to watch. Not sorry to see this turkey take flight.