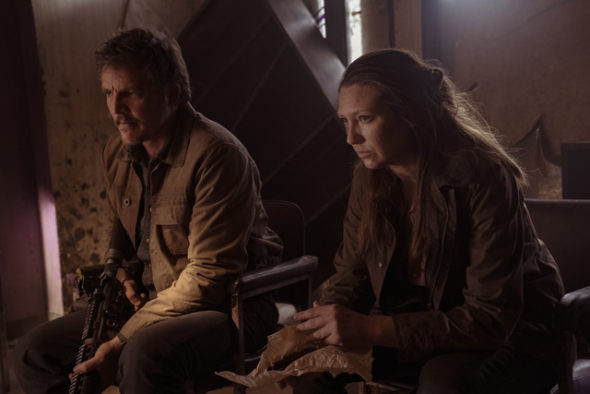 “Save who you can save.” Has The Last of Us TV show been cancelled or renewed for a second season on HBO? The television vulture is watching all the latest cancellation and renewal news, so this page is the place to track the status of The Last of Us, season two. Bookmark it, or subscribe for the latest updates. Remember, the television vulture is watching your shows. Are you?

A post-apocalyptic drama series airing on the HBO cable channel, The Last of Us TV show is based on the 2013 video game and stars Pedro Pascal and Bella Ramsey with Gabriel Luna, Anna Torv, Merle Dandridge, Jeffrey Pierce, Murray Bartlett, and Nick Offerman in recurring roles. The story takes place two decades after the destruction of modern civilization. Joel (Pascal) is a hardened middle-aged survivor who is tormented by trauma in his past. He’s tasked with smuggling a 14-year-old girl named Ellie (Ramsey) out of a quarantine zone and across the United States. What starts as a small job soon becomes a brutal, heartbreaking journey. To survive, they are forced to depend on one another and endure both brutal circumstances and ruthless killers on a trek across a post-pandemic America.

The first season of The Last of Us averages a 0.18 rating in the 18-49 demographic and 611,000 viewers. While these numbers don’t include further delayed or streaming viewing, they are a very good indicator of how a show is performing, especially when compared to others on the same channel. There can be other economic factors involved in a show’s fate, but typically the higher-rated series are renewed and the lower-rated ones are cancelled. Find out how The Last of Us stacks up against other HBO TV shows.

Will HBO cancel or renew The Last of Us for season two? Warner Bros. Discovery (which owns HBO) has cancelled numerous shows as part of cost-cutting measures.  More than ever, series need to draw a big audience to survive. A show based on an existing property, like The Last of Us, has a big advantage over a completely original series. On top of that, Pascal is already known to viewers who might be drawn to this series for his roles on shows like Game of Thrones and The Mandalorian. The show had a great launch, and I would be surprised if this show weren’t renewed. I’ll update this page with breaking developments. Subscribe for free alerts on The Last of Us cancellation or renewal news.

1/27/23 status update: HBO has renewed The Last of Us TV series for a second season.

The Last of Us Cancellation & Renewal Related Links

What do you think? Are you glad that The Last of Us TV show has been renewed for a second season? How would you feel if HBO had cancelled this TV series, instead?