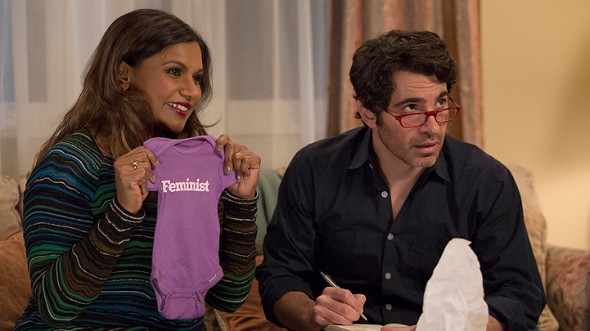 FOX has decided to cancel The Mindy Project after three seasons on the air. The low-rated sitcom may still have a fourth season however — and might even see a fifth year as well.

The series has never been a great ratings performer for the network and the numbers dropped even lower this season. The third season averaged a 1.05 rating in the 18-49 demographic with 2.31 million viewers. That’s a season-to-season decline of 15% and 10% respectively.

While FOX has decided against ordering a fourth season, word is that Hulu is considering a two-season pick up. The streaming service is in talks with Universal TV for seasons four and five. We should know more in the next couple weeks.

What do you think? Do you like The Mindy Project? Do you agree with FOX’s decision to cancel the sitcom? Would you watch a new season on Hulu?

I LOVE THE MINDY PROJECT! Its one of my favorite tv shows. Its hilarious and weird and has lots of drama! I enjoy watching every single episode on hulu with my fiance. I want to see more seasons of this tv show!

am glad is going to be on Hulu!! Fox bad move

I love the Mindy Project! I hope Hulu picks it up!

It already got picked up by Hulu for its fourth season with an order of 26 episodes recently.

What a bone head move for FOX to cancel this show. This a funny and silly show, it makes me laugh ever time. I really wish they reconsider, it’s just as funny an New Girl and it got renewed.

It is in Hulu right now, but they just to need finalize the few steps.

Love this show! It’s practically the only show my husband and I watch(ed) together and looked forward to seeing! Please please pick it up hulu!!!

Would definitely watch on hulu. Love the Mindy Project! I will definitely miss it.

Hey Ronald Ridley. You say thanks for the spoiler.! Then you say you quit watching it a while back! So in reality you shouldn’t care if it was spoiled for you. Right??? Make up your mind. Maybe you just need some sleep. Go to sleep Ronald. Nighty night…
MINDY PROJECT …best show on TV.

Obviously (to everyone but you anyway)I was speaking in general terms about the practice of writing spoilers without warning. And I didn’t ‘then say I had quit watching’. That was from a previous post. I’m sorry you feel the need (because our opinions on Mindy don’t match?) to patch some pieces of different post by me together, change their order and attack me, then try to put me to bed like a child. I suggest you grow up, grow a pair, state your name and defend your opinion of Mindy on it’s merits instead of twisting what someone else said… Read more »

HULU!!! Please pick up The Mindy Project! The show is hilarious and I watch it religiously on Hulu. I would be totally sad if I couldn’t find out about how Mindy’s parents reacted to Danny’s desperate attempt to do it right by asking for her had in marriage. I love this show…I’m surprised and sad that the ratings aren’t as high as expected. I laugh every time I watch the show. I love it so much…I often watch each episode more than once. Please HULU…pick it up.

Thanks for the spoiler with no warning.

Noooooooooo. I hate fox. I hope hulu has it.

I LOVE the MINDY PROJECT! Please Hulu, pick it up!!! I always only ever watched it on hulu anyway!

What? Fox comes up with some great shows….but cancels them all! Everyone loves the Mindy Project!
I hope Hulu picks it up! Fox loss Hulus gain!

I quit watching a while back. To me, it was like a poor imitation of friends with the characters working together rather than living together.