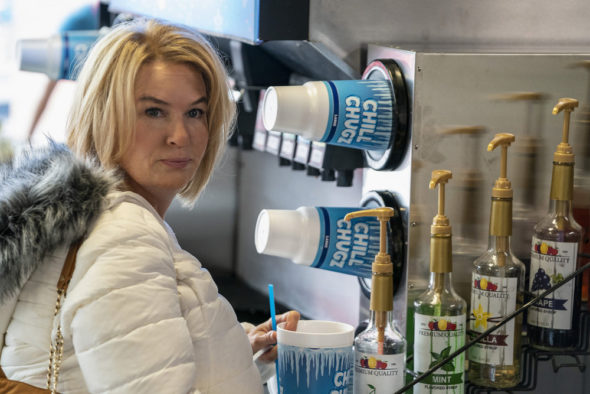 Will justice be served? Has The Thing About Pam TV show been cancelled? Renewed for a second season on NBC? The television vulture is watching all the latest cancellation and renewal news, so this page is the place to track the status of The Thing About Pam. Bookmark it, or subscribe for the latest updates. Remember, the television vulture is watching your shows. Are you?

Airing on the NBC television network, The Thing About Pam TV show is narrated by Keith Morrison and is based on an actual case that was featured on several episodes of Dateline NBC. The series stars Renée Zellweger, Josh Duhamel, Judy Greer, Katy Mixon, Glenn Fleshler, Gideon Adlon, Sean Bridgers, Suanne Spoke, and Mac Brandt. Taking place in 2011 Missouri, the story is based on the brutal murder of Betsy Faria (Mixon) that resulted in the conviction of her husband, Russ (Fleshler). He insisted that he didn’t kill his wife and Russ Faria was later exonerated. The brutal crime set off a chain of events that would expose a diabolical scheme deeply involving Betsy’s co-worker, Pam Hupp (Zellweger).

The first season of The Thing About Pam averaged a 0.34 rating in the 18-49 demographic and 2.71 million viewers in the live+same day ratings (including DVR playback through 3:00 AM). While these numbers don’t include further delayed or streaming viewing, they are a very good indicator of how a show is performing, especially when compared to others on the same channel. Find out how The Thing About Pam stacks up against other NBC TV shows.

What do you think? Do you hope that NBC will air more shows like The Thing About Pam in the future?

Its kind of old news now.Tell the story and move on.