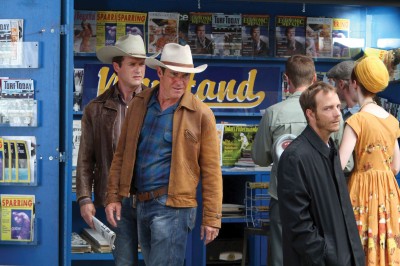 While CBS has increased their order for episodes of Elementary, the network has decided to cut the episode order for Vegas from 22 to 21 installments.

Starring Dennis Quaid and Michael Chiklis, Vegas debuted to a 2.5 rating in the 18-49 demographic with 14.85 million viewers. Considering the star power and promotion behind the series, that was a disappointment. For the next two weeks, the numbers seemed to stabilize at a 2.0 demo rating and roughly 12 million viewers.

On October 23rd, CBS ordered a full season of episodes for both Vegas and Elementary. That night, Vegas dropped 20%, to a 1.6 rating. The next week popped up to a 1.7 and this week’s went back down, to a 1.6 rating.

While the ratings have not been very good, CBS is apparently planning on sticking with Vegas for the rest of the season. If the numbers fall any further, it’ll be interesting to see if they cut any more episodes.

What do you think? Do you like the Vegas TV series? Do you think the ratings will come back up?

We realy enjoy this show, not the usual dectective ,high shooting show, Love the period, please do not cut this show.

Keep The show vegas love it

Love the show Vegas Please Bring it Back

we live in vegas and we like to remember what life was like in the 60-70’s. your story line is good, characters are good. just advertise more. vegas is really hot right now, so it should have a good show following.

Love Vegas! Cast is great and story line good. Was very disappointed when it went off.

The actors are all great in Vegas and I’m disappointed it is no longer available. I really like the ’50s scenarios and scripts.

Please keep Vegas on the air!

I think CBS should keep Vegas.

Vegas is a great new show!! It is in a lousy time slot. Put NCIkS L.A. At 10 pm and it’s ratings will. Dropping like a rock! People work and goto bed!

I lived in Vegas for a brief time at the very same period this show is about. I wish you would keep it on the air forever! Best show I’ve watched in many years. I think Elementary is a stupid show and that is the one you should take off the air!

I really enjoy Vegas, the twists, Dennis Quaid in particular is great, a really wonderful adult drams with insight into the 1950s. Would hate to see it cancelled

Vegas and Elementary are two of my favorite shows!!! Please don’t cancel them!! They deserve a chance. Maybe they’re not being watched because they’re not being marketed correctly. They’re new shows and I don’t think enough people know about them.