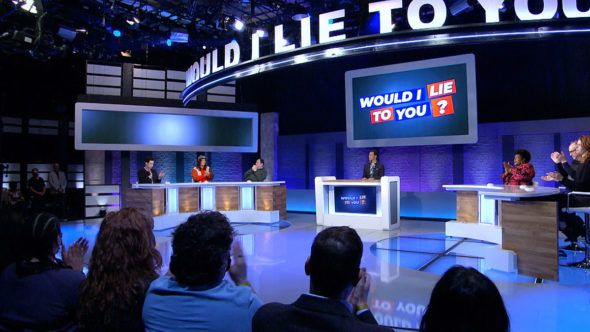 Will this new show stick around? Has the Would I Lie to You? TV show been cancelled or renewed for a second season on The CW? The television vulture is watching all the latest cancellation and renewal news, so this page is the place to track the status of Would I Lie to You?, season two. Bookmark it, or subscribe for the latest updates. Remember, the television vulture is watching your shows. Are you?

Airing on The CW television network, the Would I Lie to You? TV series is based on the British series of the same name and is hosted by Aasif Mandvi. In each episode, Matt Walsh and Sabrina Jalees each lead a team of celebrity guests. In various rounds, the teams are tasked with determining who is sharing facts and who is full of fiction. They ask questions and watch body language to determine which stories are outrageous but true, and which are completely made-up. This season’s celebrity guests include Brooke Shields, Amber Ruffin, Laura Benanti, Michael Ian Black, Andrea Martin, Julie Klausner, Jordan Klepper, Adam Pally, Chris Gethard, Dulcé Sloan, and Preet Bharara.

The first season of Would I Lie to You? averages a 0.05 rating in the 18-49 demographic and 313,000 viewers in the live+same day ratings (including DVR playback through 3:00 AM). While these numbers don’t include further delayed or streaming viewing, they are a very good indicator of how a show is performing, especially when compared to others on the same channel. There can be other economic factors involved in a show’s fate, but typically the higher-rated series are renewed and the lower-rated ones are cancelled. Find out how Would I Lie to You? stacks up against other CW TV shows.

Will The CW cancel or renew Would I Lie to You? for season two? The series appears to be relatively inexpensive to produce and the network needs affordable programming to air on Saturday nights when viewership is lower. This could potentially replace the long-running Whose Line Is It Anyway? show. I think it has a good chance of being renewed. I’ll update this page with breaking developments. Subscribe for free alerts on Would I Lie to You? cancellation or renewal news.

Would I Lie to You? Cancellation & Renewal Related Links

What do you think? Do you hope that the Would I Lie to You? TV show will be renewed for a second season? How would you feel if The CW cancelled this TV series, instead?