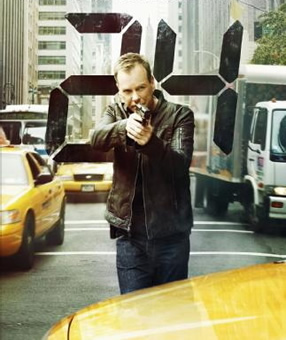 On Friday, following a joint decision by 24 star and executive producer Kiefer Sutherland, executive producer and showrunner Howard Gordon, Twentieth Century Fox Television, Imagine Entertainment, and Fox Broadcasting Company, it was announced that this season would be the end of 24, after eight seasons on the air. The decision to end the series didn’t come as a big surprise as there have been rumblings about the series’ demise for awhile.

In a recent interview with Variety, Sutherland said that much of the decision came down to the fact that Gordon felt it was going to be very difficult to come up with a good story for season nine. The actor also said, “He and I both felt that the opportunity of making a movie, and doing a two-hour representation of a 24-hour day — which would not be restricted by time — was something that was appealing to he and I both.”

Looking back, Sutherland’s found the experience of making the series very rewarding in many ways and calls it “the greatest learning experience I’ve ever had as an actor, and singularly the greatest opportunity I’ve every had.” He noted the great friendships that he’s made and credits 24 with making him a better actor.

He said, “I’ve been able to work five days a week for eight years. I can’t begin to describe what that does for your confidence and your ability to break down a script, break down a scene, find intention. That’s something I know I will take with me, and I’m very grateful for.”

Though this TV series is coming to a close, Sutherland would be very open to doing another series in the future. Citing memorable shows like The West Wing, The Sopranos, The Wire, and Californication, Sutherland called television “an unbelievably exciting place to be,” despite the current commercial climate.

In terms of the 24 movie, Sutherland said, “Billy Ray is in the process of writing it right now. I’m very excited about the idea. He’s a fantastic writer. I know he’s been working with Howard recently. I’m very excited about the opportunity, and singularly because it’s a two-hour representation of a 24-hour day… Before on the TV show, the crisis had to come to us, because the best we could do was get across town. And the two times we ever put Jack Bauer in a plane, it just didn’t work. So it alleviates a huge hurdle that real time writing presented for us.”

And finally, the actor talked about the mood on the set as the cast and crew film the final episodes. He said, “It’s going to get sadder and sadder. But I think it’s going to be tempered by a sense of accomplishment. These people have worked unbelievably hard. I can’t say enough about our crew… I absolutely believe that creatively we finish [the show] in a really strong place, a much more definitive place. It’s going to be pretty clear what Jack Bauer’s plight is.”

Click here to read the complete interview. The two-hour series finale of 24 is schedule to air on May 24th on FOX.

What do you think? Would you like to see Kiefer Sutherland return to TV someday? In what kind of show? Another high-action thriller or something else? Any shows on TV today that could use his talents?

I JUST HATE TO SEE “24” END. IT HAS BEEN THE BEST SHOW EVER. MY SON AND DAUGHTER IN LAW ARE JUST LIKE ME AND REFUSE TO MISS IT. I LOVE THE FAST PACED EPISODES. SOMETIMES I AM ALMOST ON THE EDGE OF MY CHAIR BUT I REFUSE TO MISS EVEN A MINUTE OF IT. I HOPE THEY DO MAKE IT INTO A MOVIE. I’LL BE THERE!

I am devasted at the loss of “24”! However, I will be even more devasted if they kill of Jack Bauer, like they did Renee Walker! This man is such a superb actor, I just can’t get enough of him! Everyone needs a “Jack Bauer” on their side these days! He is nothing short of AMAZING! I have been watching Kiefer Sutherland for years, and his acting skills have never failed me! On top of all that, he is a very nice human being, full of emotion and kindness, just like the Jack Bauer character he portrayed on “24”! I… Read more »

Please reconsider ending “24”. It is one of the best shows on T.V. today. I look forward to January every year and I watch the show from start to finish. With all the twist and turns in the story line, you are always on the edge of your seats. Consider ideas from other sources. We keep loosing all the good shows. Keifer Sutherland is a great actor and will be missed in his role as Jack Bauer. I would like to see him in another action packed T.V. series and movies.

Here’s an idea. Open it up around the globe. Change the name of the show or call it 24 days. Then have Jack and his sidekick (s) Chloe and crew trek around the world to different hotspots helping other countries tracking down terrorists. Remember the two hour “teaser” last year when Jack was in Africa and helped the school kids and village? Anyway that is another 2 cents from me. I will miss 24 if it does end this season.

Why don’t you open up the script to fan ideas. We are always coming up with idea on whose ass Jack Bauer can kick next. Make it a big nationwide campaign. Don’t take away our 24!!!!

This is by far the best show on television…gripping the edge of your seat kind of exciting, tension provoking, extremely creative (hats off to marvelous writers), sensational actors who make you believe that you are right there in the thick of it all, and the wonderful crew who help to pull it all together! I’m sure with all this talent you can come up with another story line for next season! You are all the best in your field and you have an ENORMOUS following. You can’t argue with SUCCESS. Take it and run with it!

I’m so sad…… I’m a huge fan of Jack Bauer, the best action hero. I hope now that the 24 feature film will be released sooner
Thank you Kiefer and all the best !!

Wow! 24 is the best show and I don’t understand why it has to end like this. Cant they get a larger area to work with. I cant believe I actually cried over the ending of a television series. But my tears were worth it because there aren’t any shows out there as good as 24. I seriously hope they find a way to reconsider this decision.

I think he would be great in another role similiar to what he portrayed in “24”. Something more powerful though, not as what he does in “24” and a field op agent, but what about a man in power, like a military general. Or perhaps a special ops soldier of the Marines. I just think he is great at what he does and would really enjoy seeing him return to tv in a role like “24” but with twists and something other then an agent. Regardless of what he returns to do, I’ll be there to watch. I think he… Read more »

NO.NO.NO..please don’t end this show..this is the only show I watch. Jach Bauer is my favorite person. First we loose health care not JACK, what is happening to our country!ha Please reconsider!!

I will be waiting for Kiefer in 24 the movie I am a Espionage Spy thriller fan anything from Jason Bourne, to the M:I movies and now Jack Bauer. I’ve been looking like crazy on the internet every since this news broke to find some clerifaction on if Fox and Kiefer are going to turn Jack Bauer into a series of movies ferancise like they’ve done with bond. I love 24 and this time I will be waiting for Jack when he shoots back into theaters, which I’ve been reading is 2011. If anyone has any info on Kiefer or… Read more »

What can we do to have it continue! Like others have written – Monday’s will not be the same if 24 is not on. It truly is the best show on television. Keifer as Jack is the best. We need Jack Bauer. Is there anyway it can go to another network or something? A movie is not enough that’s just 2 hours – I’m going to make calls – PLEASE PLEASE Don’t stop ticking!!!!!!

Sad to see the clock stop; however good to always have a strong finish. Can’t wait to see him in the Movie 24, they give a role to his father and twin sister in the movie make it a family affair. Other type of series Kiefer would be great in would be like Damages. All the best to the cast of 24, we will be looking for you in things to come.
All the best.