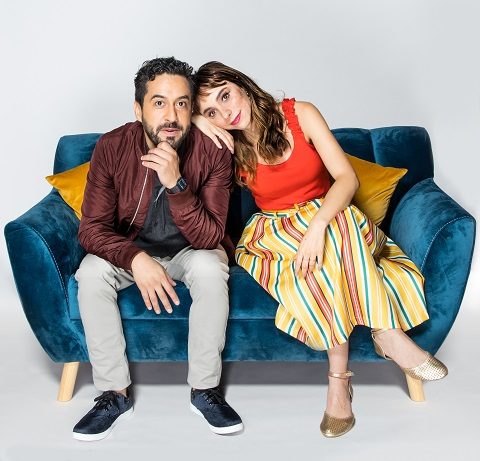 All for Lucy is headed to Amazon Prime Video. The new sitcom is a reimagining of the classic I Love Lucy. The Spanish language comedy will air in Latin America and the United States, and it will star Natalia Téllez and Daniel Tovar as Lucy and Ricky.

“Amazon Prime Video announced today that it will launch All For Lucy, a modern, reimagined version of the beloved comedy series I Love Lucy. The project is being developed and produced by Endemol Shine Boomdog, a division of Endemol Shine North America, teaming with Elefantec Global that together acquired the rights to create an adaptation of the series. All For Lucy will launch exclusively on Prime Video in Latin America and the United States. The format rights are licensed by ViacomCBS Global Distribution Group.

In this new series, Lucy is a 21st-century woman who wants to be in love, but doesn’t want to give up her individuality. Mexican actress Natalia Téllez (Después de Ti) is set to star in the iconic role of Lucy, while Daniel Tovar (Mirreyes Vs. Godínez) will play her husband Ricky. And in another modern update on love, Andrés (Andy) Zuno (Al Diablo con los Guapos) and Daniel Haddad (La Búsqueda) play the couple Esteban and Federico, who are Lucy and Ricky’s next-door neighbors.

“We are excited to continue showing the explosive creativity of our talent in Mexico and bringing it to our Amazon Prime Video customers,” said Francisco Morales, head of content for Mexico at Amazon Prime Video. “We can’t wait for this title to join our growing list of exclusive and Original series and films from around the world and continue to show the high quality of productions in Latin America.”

“I Love Lucy is the basis of every comedy show ever done – and we are honored to reimagine it with its core characters and stories,” said Endemol Shine Boomdog’s Leo Zimbrón. “We took this classic sitcom and transformed it into a romantic comedy for 2021. It was a hard and beautiful task, working with fantastic talent in front and behind the cameras. Our cast made the characters their very own, so we have a very current Lucy and Ricardo relationship, and the storylines are by all means ‘today’s life.’ Together with our partners at Elefantec, we are very proud to bring these fun adventures to the audiences of today, and what a great way to do it, making it happen through Amazon Prime Video.”

From Elefantec Global co-founder José “Pepe” Bastón – “I Love Lucy was the first successful TV show to bring a Latino actor as part of the main cast. We are now excited to be able to produce our modern version with a 100% Latino cast and crew. Our writers have done an excellent job adapting this American classic for the global Latino audience, while maintaining its essence of lighthearted, family entertainment. We thank Endemol Shine Boomdog for the opportunity of this collaboration.”

“We are thrilled at the opportunity to work with Amazon Prime Video, Endemol Shine Boomdog, and Elefantec Global on this very modern day take on the original series I Love Lucy,” says Roxanne Pompa, vice president, formats at ViacomCBS Global Distribution Group. “The Todo Por Lucy storylines are truly fresh and imaginative and we believe audiences will enjoy this comedy series.”

A premiere date for All for Lucy will be announced at a later time.

What do you think? Are you planning to check out All for Lucy on Amazon Prime Video?

This sounds like garbage. This has nothing to do with Lucy. Just another idea trying to take advantage of the name of the original show.

Why don’t we reimagine Bewitched by making a drama about a hard working ad man and the bewitching world of advertising. His boss is the slippery Larry Tate. See this idea doesn’t work – why – because the real magic is not there.

I actually thought Cate Blanchett was supposed to play Lucille Ball in a movie. I could be wrong about that but I could’ve sworn I heard that.

The latest on that is Cate is out and Nicole Kidman is in. With Javier Bardeen as Ricky.

Oh, I see. Thanks for that.

Without Lucille Ball, Desi Arnaz, Vivian Vance and William Frawley the magic that was I Love Lucy cannot exist. Lucille proved that herself with her 3 follow-up series…none of them could replicate the excellence of the original. I am sure this cast are all good actors but the chemistry of the original stars was off the charts, and it had the virtue of material and sight gags that had never been seen before, Pull the plug guys and go back to the drawing board….let’s stop this trend of re-hashing ideas from the past. It’s blasphemous.

A few Christmases ago I bought the complete series of I Love Lucy for my mother so she could watch that show whenever she wants. Thank God I did that. Especially when it comes down to horrible decisions like this. I hate when people talk about “re-imaginings” and stuff because they gloat about all the effort they’re putting into their show with such energy and vigor when they could put such effort into making something new with new characters.