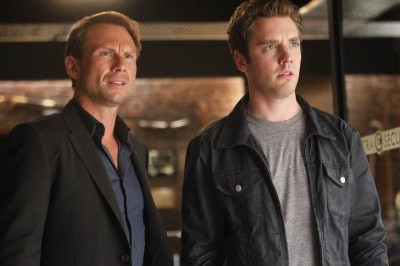 Last week, fans were upset to hear that FOX had axed newbie sitcom Breaking In after just a handful of weeks on the air. Though the sitcom’s numbers were pretty good, the series lost a huge portion of the American Idol lead-in audience and it seemed like the network felt they could do better with the timeslot.

Not long after the cancellation news, word came that Breaking In might not be dead after all. FOX and Sony Pictures TV were looking into possible ways to keep the series alive.

There’s one episode left and the network has now decided to see how it will do in another timeslot, this time paired with the already-renewed Raising Hope sitcom. If it does well enough, FOX might reverse its decision.

Co-creator and executive producer Adam F. Goldberg tells TV Guide that the cancellation came as a surprise because he believes that the network loves the cast and the show and have been pleased with the ratings. He notes that FOX entertainment president Kevin Reilly called the cancellation “a heartbreaker” and wasn’t even fully committed to it when he called Goldberg to give him the bad news, saying that it wasn’t a definite pass.

Goldberg knows that schedule change comes at the last minute but hopes that enough people will find it and tune in for the season (hopefully not series) finale.

In addition to tonight’s ratings, Breaking In’s future may have a lot to do with the network being able to find a compatible series to pair it with. Goldberg said, “They just really don’t know what to do with it… When you have a family show or a relationship show, they really know how to promote that and make that a hit. But if you have a show about a bunch of geniuses who do heists every day, that’s hard for any network to figure out.”

What do you think? Is Breaking In worth saving? If you were programming the network, where would you put it?

I watched the finale of Breaking In! Great show and it just gets better each week. Fox, please renew it! Good idea pairing it with Raising Hope, another fine comedy with a heart-warming center.

Really? Cancelled or mulling over the thought of cancelling? This show is like a baby taking it’s first steps…it takes a little bit to get it’s momentum going, then away they go! With all of the god awful craziness and ever increasing depressing news out there, we need this show as an outlet. Please just let us sit on our couches, shed our daily accumulation of Bullpoop, turn off the thinking part of our brains and just laugh! Hell, in a couple of years I won’t even have my social security to look forward to…Gimme something.

For the love of all that is holy… DO NOT CANCEL THIS SHOW!!!!

dont cancell breakin in im young and tv is honestly all i love if i were to move the show some where else i would move it to abc .

If FOX doesn’t give Breaking In at least one more season I will be very upset. It’s bad enough that FOX has canceled so many of my favorite shows in the past ( including Family Guy) without really giving them a chance to catch on. Don’t make another Family Guy mistake. People love this show. It’s all over Twitter and Facebook. It has a brilliant cast and deserves a chance to win over the North American Public.

I don’t normally watch sitcoms, but I watch Breaking In, so I hope it gets saved. I’ll be watching tonight.

I grew to like this show and was disappointed it was cancelled. Unfortunately, a surprise airing after the low-rated Raising Hope isn’t going to save it. Personally, I would have kept it in the pipeline to bring back on the air when one of the new sitcoms fails next season.

Yessssssssssssssssssssssssssssss!!! KEEP Breaking In!! Hysterical, with some great people cast in it. Sorry but disagree with the first poster… no, there are NOT that many comedies I can even watch, let alone stand. Please reconsider the cancellation. I’ll take Breaking In over the OVERHYPED Modern Family any day!

Love Breaking In – please don’t cancel it!!! Move it behind another hit show and it will do fine – it’s well acted, the stories are good, it’s funny – please, please keep it!!!!!!!!!

This, to me, is one of the funniest sitcoms on TV. The subtle humor and witty comments are hilarious. All I have to say about it is “Sasquatch”.

very much it is a good show

do not cancel breaking in. come on guys its a good show, its clean, its fun, and a really good show to watch. Give it a chance see what happens!!! you’ll never know unless you try!!! Keep some good programing on tv for once!

It wasn’t bad, but I lost interest after a few weeks. Well-acted and endearing, but there are too many sitcoms that are funnier to add another one to my DVR.