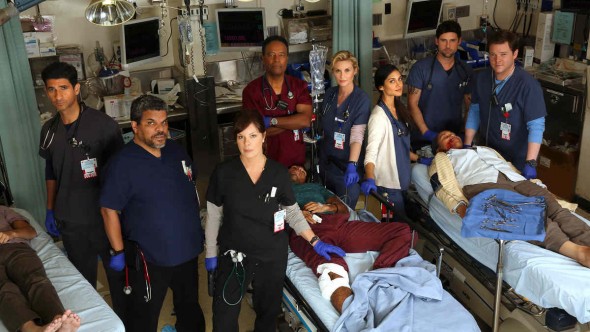 TV show description:
This gritty medical drama revolves around an Emergency Room in Los Angeles where underfunding and understaffing pile huge pressure on its staff. A “code black” is issued when the ER no longer has the manpower, capacity or equipment to operate effectively.

Doctor Leanne Rorish (Marcia Gay Harden) is the ER Residency Director. She’s a brilliant doctor and an experienced professional who often has to resort to her intuition as opposed to standard medical procedures in order to save lives. She reminds her staff that life is measured in split seconds and a moment of hesitation can be the difference between life and death.

On the flip side to Leanne’s risk-taking is Doctor Neal Hudson (Raza Jaffrey) who is constantly at odds with her cavalier attitude.

Leanne’s confidante is Senior Nurse Jesse Salander (Luis Guzman) who’s seen it all at the country’s most notorious ER. His job is to manage the residents. Like the other technicians, doctors and nurses, he is facing a daily battle to save lives under immense pressure.

Series Finale:
Episode #47 — Business of Saving Lives
Angels Memorial descends into chaos when a plane crashes into the eighth floor. Also, it is up to Mario to save Noa’s life when she has a car accident. In addition, Willis admits to Rox that he needs her in his life, and the doctors gather in court to support Leanne for her custody hearing.
First aired: July 18. 2018.

What do you think? Do you like the Code Black TV show? Do you think it should have been cancelled or renewed for season four on CBS?

Very disappointed that this wonderful and intelligent show was cancelled. Why is it that when a TV series becomes popular it gets removed. No beg your pardons, no reason given, just treat the viewing public with disdain and contempt. Absolutely disgusted that such a realistic but most enjoyable, show has been cancelled.

This was a brilliant show. Can’t believe it was cancelled.

Loved this show! Still cannot understand why it was cancelled. Still holding out hope that it will return.

My husband and I are very disappointed that Code Black was cancelled. The story line and acting are so much better than Chicago Med. Or The Good Doctor! Please rethink this.!

BRING CODE BLACK BACK ONE OF BEST SHOWS ON TV

How could they cancel the best show on television. This is better then the other dramas.

Good show. Needs to be renewed

I cannot believe that CODE BLACK…the best series was canceled!! How can that happen…the actors were and are the best, the writers hit it with their story lines and the audience was willing to wait but the waiting has been too long and we demand-write and reaffirm the passion we all feel about that very special show. Please add this to the heaping pile of requests to have CODE BLACK return ASAP with a special back-on-air 2 hour opening.
Thank you for your consideration in this very important matter

Code black was a terrific show. Great writing, great actors, do not understand why this show was cancelled.

Still angry this show was cancelled…it’s one of the rare prime time shows I chose to watch. Guess it’s time to tune into Netflix

Loved that show – one of the best last year! Can’t believe it was cancelled!

This was the best show ever!!!! should not have canceled it!!!

Save the Show. It had great topics… Far better then all those so reality shows… you all mass produce…