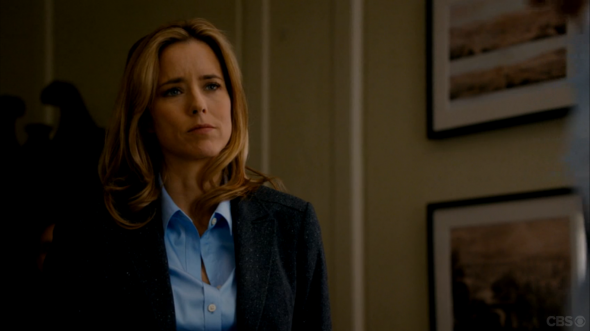 Though politics are an extra touchy subject these days, CBS decided to order a new drama about a blonde, female Secretary of State — Madam Secretary. Some feel that it’s a thinly-veiled allusion to Hillary Clinton while others see the show as a piece of fiction. Either way, CBS is a corporation that makes money from selling advertising and must attract healthy ratings to do that. Is Madam Secretary a success with viewers? Will it survive? Cancel or keep it?

The series debuted on September 21st to a mediocre 2.0 rating in the 18-49 demographic with 14.75 million viewers. Last week, Madam Secretary dropped 30% in the demo to a 1.4 rating and dropped 14% in viewership, to 12.72 million. Those aren’t very encouraging numbers for a new series and CBS was surely expecting a lot better.

If Madam Secretary’s ratings stay at this level or continue to decline (particulalry in the demo), this new show will be in very real danger of being cancelled. On the positive side, the network is likely to be patient — at least for awhile. The ratings could go up, especially if the show starts getting some positive word of mouth.

But, what do you think? Do you like Madam Secretary? Will you keep watching? Do you think it should be cancelled? Do you think that it should/will end up being renewed for a second season?

Try as you might…this is a fictional character…nothing more. Hillary could never be this woman, even if she was a Republican!
Can’t get into the show knowing it’s a political ploy to trick the public into thinking this was Hillary…What a Joke!

The ratings aside, tonight’s episode was an unwatchable trainwreck. Trading weapons to Pakistan for a grade in an ethics class? That’s a stretch for even the most open-minded of viewers. You cannot constantly tie her husband into her weekly affairs, it’s just not reasonable. And if every episode has the action unfolding via video chat it’s going to be impossible to build any kind of dramatic tension or even a connection to the people she is rescuing. They are doing their best but man, this will be an uphill battle.

Agree to KEEP IT!

We LOVE the show. It’s very well written, we can’t wait to see it every Sunday — and we’ve turned our clients on to the show who ALSO agree with us. (We have about sixty students and we are always discussing shows that we like as a group). Please give it some time– I just think people judge it before they’ve given it a chance perhaps. It is really a great show. Keep it for a second season — let it “season” a little and I think it will catch on really well…… We haven’t had a great show like… Read more »

Keep it! CBS has so little decent TV Shows that Blue Bloods and Madame Secretary are about the only CBS TV Shows I Even Ever Watch nowdays!

I love the show, love Tea. I would love to see it run through the season before any decision to drop it. Please CBS do the right thing….keep the show.

She plays the line between serious and smart-ass pretty well, but i think the writing is still pretty weak. Overall her character is better than i expected but not enough for me to keep watching even on an otherwise dull night.

I really like the show and look forward to it. Tea Leoni is a breath of fresh air. So glad to have her back on prime time.

Fantastic show. It’s not a political show. It is about strategy and risks that come with that type of position at a very high level. Be it government or the higher levels of the corporate world.

‘not a political show’!!! You are right , other than trying to convince the voting public that Hillary actually accomplished some as Sec. of State you are right it’s not political.

I look forward to the show every week!

I LOVE Madame Secretary! It is a great new show; totally engrossing. It has only been on a couple of weeks…can’t the Powers-that-be leave it alone for a while??

I agree with Judy Hubbard. I like this show and the characters are strong and principled. I hope CBS doesn’t get weak kneed and expect instant high ratings. This show will find its audience in good time.