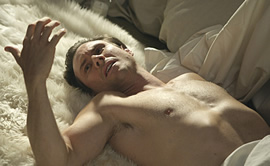 Over the past few years, NBC has certainly had some problems attracting viewers. One of their biggest trouble spots on the schedule has been Monday nights at 10pm. Great shows like Journeyman, Studio 60 on the Sunset Strip, and The Black Donnellys have all tried and failed to bring large numbers of viewers to the peacock network. The most recent timeslot casualty is My Own Worst Enemy.

My Own Worst Enemy centers around Henry Spivey (Christian Slater), an everyday businessman with a wife (Madchen Amick) and two kids (Taylor Lautner, and Bella Thorne). Unbeknown to himself and to his loved ones, Henry has another identity. He’s also a secret operative and trained killer named Edward Albright.

The show debuted on October 13, 2008 on NBC and attracted a mediocre 7.27 million viewers and a 3.0/8 rating/share in the 18-49 demographic. Over the next several weeks, the numbers dropped to a low of 3.63 million and 1.5/4. Worst Enemy lost over 40% of its Heroes lead-in in overall viewers and even more than that in the key demographic. The disappointing ratings caused NBC to pull the plug and shut down production almost immediately.

Last week, NBC aired episode nine called “Henry and the Terrible… Day.” Unfortunately, unless the network decides to change its mind or another channel decides to take over Worst Enemy, this is the series’ last episode. If you missed it and would like to see where we left Henry/Edward, take a look….

You know if a show has something going for it and creative writing and acting, then by all means keep it going, it don’t take a genius to figure out that it takes time to build a audience, to succumb to dedication of viewers, after the journeyman was cancelled I was about to give up on NBC, I know I did with the way the fox network treated some of my fav shows, left me haggin like a dead man in the ropes, now NBC is practicing the same methods as the fox network. It is a time of hardship… Read more »

I am completely shocked that mowe was cancelled. Its unlike any other show on tv right now and it continued to get more and more interesting every week. I really hope another network picks it up for the sake of the fans who are tired of watching the garbage on tv. There has to be a network out there that sees what we see. Isn’t there?

NBC should have at least shown us some respect and ended the story rather then to just cut it off as they did. Just shows that they have no regard for their viewers.

And all NBC is left with are stupid sitcoms. Think if Fox had cancelled 24 in it’s first season?

I am completely angry that you canceled this show!!!!!!!!!!!!!! I agree these dumb chick flick shows are starting to get very annoying!!!!
Please bring it back!

Oh my gosh! This is the best show! Christian Slater rocks in My Own Worst Enemy! Please leave it on a couple of more months, it is truly great with an awesome cast!!!

@jessica: You can watch episodes on hulu.com

does anyone know where i can watch this show on the internet?

Wrong move…really bad move. Why cancel the good shows and leave all crummy ones. M O W E took the route of Journeyman…kplunk! I liked them both. With all the dumb shows on, these two had risen to the top of the barrel. It’s almost as if I know a show will be dropped…………… because I like it !
Maybe I’ll stop watching NBC altogether. It’s better than being left hanging !!!!!!!!!!!!!!!
ROBIN

I really enjoyed it, as I did Journeyman, then puff…it’s gone. The last episode-on the 22nd- never showed up on my TV and I had set my DVR to record it. It seems some juggling could have been done to regain it’ audience if its share had declined. Heck, sell it to USA network! Seemingly garbage shows are always renewed and good ones fall to the wayside. M O W E was a show that made you think- ya couldn’t just coast thru it while reading a magazine and playing with your kids while it was on. The no-mind shows… Read more »

They’re cancelling it? No! No! No! They need to at least finish it! I admit I didn’t like it at first, but I gave it a chance and now I love it! I watch it with my dad every week. Not only do I love the show, but Slater is so hot! I still hate they didn’t finish journeyman. Don’t cancel it, just give it a few more months please!!!!!!!!!

I don’t have cable. I only watch one show each week. You will continue the show! Someone turn the edward balls back on to your program director!

i really enjoyed warching My worst enmey its the best show on mondays please do calance it give the show a chance .

WHAT ARE YOU GUYS DOING?????
IT IS THE MOST ORIGINAL SHOW!!!!
IT IS VERY WELL WRITTEN AND THE ACTING AND SUSPENSE JUST KEEPS COMING….WELL…NOT IF YOU GUYS CANCEL IT….
PLEASE RECONSIDER OR FINISH THE SHOW PROPERLY SO IT CAN BECOME A CULT CLASSIC… SLATER IS THE BOMB…..COME ON GUYS…,.
DO IT FOR ME…..THE FAN…..THX FOR LISTENING….

I knew that they were going to cancel this show! I like it; that’s how I knew that they were going to cancel it!! I’m watching NBC right now and My Own Worst Enemy isn’t on!!! This is supposed to be the final episode and this dumbass “momma’s boys” chick flick-type/***** monger show is on and I’m not a happy person!! I pray that they take the final episode and make it available on Hulu, or one of the other websites where you can watch tv shows, but the **** that they are pulled is a new low, or perhaps… Read more »