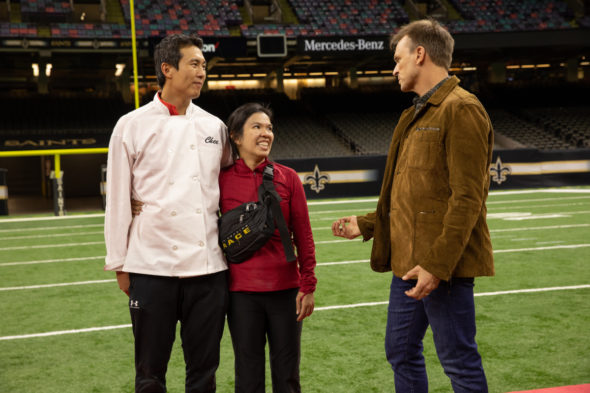 The Amazing Race is gearing up for a big return after the pandemic delayed production for the series. Filming is set to resume on season 33 and the competition series, hosted by Phil Keoghan, will return to the airwaves at some point during the upcoming 2021-22 season.

Only three episodes were filmed before production on season 33 was shut down in February of 2020. This year will mark the 20th anniversary of the show, and the series shows no sign of ending anytime soon.

Elise Doganieri, one of the creators of The Amazing Race, spoke about it returning to television earlier this year. She said the following, per TV Insider:

“We’ve been talking to CBS and they want to get back. We just need to get that mass vaccination happening. Safety is key, you don’t want to do a show and have people get sick. That’s our priority.”

A premiere date for season 33 will be announced at a later time by CBS.

What do you think? Are you excited for the return of The Amazing Race to CBS this season?

I am very excited that the show is coming back!! One of my favorite shows.

Omg, I’m so happy, can’t wait, my favorite show, of course I want everyone to be safe.

Yes, love Amazing Race…looking forward to watching once they get to finish this season.

I love the show and can hardly wait till it returns. I have watched ALL of the old shows at least 2 times and I am starting at the beginning again. I am very excited that it was not canceled.

I’m very excited that its coming back, my favorite show ever.

I can’t wait for it to come back on. One of my favorite shows. I have many Seasons on DVD. Love, love, love this show and the host, Phil.

This is one of my favorite shows! So glad that it’s back.

AMAZING RACE is my FAVORITE SHOW!!! I can’t say enough good things about it!!! One learns about diffferent countries and cultures as they race!!! Oh I cannot wait for this show to return! One of the BEST shows from CBS!!