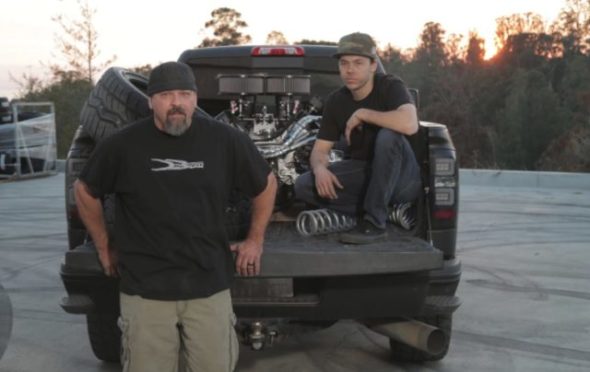 Doug and Brad Deberti are back! Viewers will see the father and son team back to work in a new season of Twin Turbos. The new season is set to premiere in December.

Discovery Channel revealed more about the return of Twin Turbos in a press release. Check that out below.

“The father-son duo is back to continue the family tradition of designing and fabricating some of the world’s most innovative custom cars. This time, Doug and Brad are ready to show the world they can take on any vehicle, new or old, and transform them into one of a kind, viral sensations. Along with their family business, Brad DeBerti is still chasing his dream of becoming a professional race car driver. This season, the DeBertis push the limits on the innovation and Brad puts the ‘pedal to the metal’ like never before to keep his racing dreams alive on the returning series, TWIN TURBOS, premiering Monday, December 9, at 10pm ET/PT on Discovery.

With another SEMA auto show ‘Best in Show’ award under their belt, they hope to repeat with a design that will revolutionize the truck industry with a truck they call ‘The Transformer Truck.’ Their idea- take all the storage of a not so stylish stock tool truck and hide it all within the seemingly stock body of a F-250. But the transformation is easier said than done, and with SEMA just a couple months away, tensions rise as they feel as if they may have gotten in over their heads on this one-of-a-kind DeBerti build.

With all the DeBerti’s recent success, comes hard decisions. If they want to expand the business, the shop will need to expand in size. But expansion comes at a big price, forcing them to pull up stakes and move to the heart of racing and car fabrication country – North Carolina. It’s a tough call to make, especially if it means leaving behind family and friends.

On top of building groundbreaking cars, expanding the family business and moving, Brad fights to keep his racing dreams a reality. Despite winning ‘Rookie of the Year’ in NASCAR, the DeBertis struggle to find a sponsor and is forced to sit the season out. But Brad won’t let that roadblock stop him from reaching the starting line. Harnessing the power of social media, Brad lands the opportunity to shift gears into Rally Racing with a tryout for the Dirtfish rallycross team. But when he arrives for the tryouts, he quickly realizes that he may have bitten off more than he can chew- the cars are completely different than what he’s raced, so he must relearn to drive. It’s a steep learning curve, but if Brad wants to keep pursuing his dreams of being a champion racecar driver, he needs to show Dirtfish he’s got what it takes.”

What do you think? Are you a fan of Twin Turbos? Will you watch the new season in December?

I’ve got a 77 blazer and would like to see if anybody has a kit that would have the front doors open like a back door of a mini van
.slide back and lock open..if anyone. I think ya’ll would now ..thanks

Watched 1 episode, because I have a Econoline.
Would never watch another. Forced fake nonsense.

PLEASE DON’T CANCEL twin turbo Finally a father and son not only do top notch work, but they get along wonderfully . Their stuff is new different and exciting

Love the show. Great to see a father/son team work to perfection. Good luck in your big move. Discovery Channel is crazy if they don’t renew.