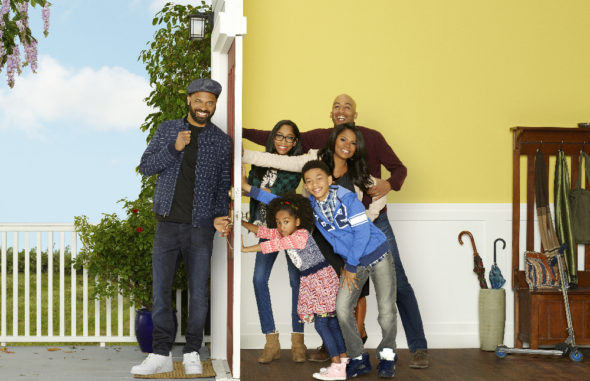 ABC is saying goodbye to Uncle Buck. According to The Hollywood Reporter, the network has cancelled the series after one season.

Uncle Buck debuted in June, and its first season received decent ratings for a summer season sitcom, earning an average of 1.12 in the 18-49 demo and 3.878 million viewers.

Disappointed. No more @ABCUncleBuck. Cancelled.Thankful to have worked with @ABCNetwork.Proud of what we've done. Thx 4 let us entertain u.

What do you think? Did you watch Uncle Buck? Are you sad the series has been cancelled?

I really enjoyed the few episodes of “Uncle Buck.” It was a “clean” family show that was funny with great actors. I really wish you would re-consider bringing it back. Thanks!

I personally felt Epps should of stayed on Survivor’s Remorse he really shined as a much more believable funnier uncle and I’m not sure if I will continue to watch the show without him. Killing off his character was as bad of a move like when Shemar Moore left criminal minds and I stopped watching that.

NO!!! THIS SHOW WAS TOO GOOD TO BE CANCELED! BRING THIS SHOW BACK FOR SEASON TWO!!! THE PEOPLE HAVE SPOKEN!!

This is unbelievable…
Why and who would let this happen?
Please sell the rights to another company this show is too great to be cancelled after just one season…

Very disappointed this was a great family show, not to many shows on like this now a days. Uncle buck is the only reason i watched ABC.

I think Uncle Buck was very entertaining very very very disappointed in ABC I know you will replace it with some LAME show !!!!!

I wish it would stay or some other network picks it up. Like many have said: it’s hard to find a family friendly show.

My kids and I really enjoyed the show. It was funny and family friendly, a rarity to find these days. We are sad it won’t be returning!

Wow…I’m so disappointed. I loved the show. It’s a shame they are not moving forward with it.

The show premiered in the summer. Give it a chance it is way better than blackish.

I agree with you about this show being better than blackish. I watched the first episode of blackish when it first aired and I hated it, I haven’t watched it since. but I fell in love with uncle buck, it is funny and just fun to watch. I cant believe ABC cancelled this show after it got such good ratings, but stupid shows like modern family still hasn’t been cancelled.

Why does it have to be better then the only other black show on ABC, can’t you just say it’s a great show and leave it at that. what are you saying,1 black show on at a time. 2 shows are too much.

Given the fact that the show aired in two episode blocks, it seems like ABC didn’t have a lot of faith in it anyway. They just wanted to burn ’em off. I didn’t think it was awful, but it’s no Blackish.

Wow that was a quick cancellation by ABC network, well here goes to show you that not everything Indus theme survives. I really didn’t like the show even though I really wanted to like it. The actors were unbelievable the script was terrible in the settings were look like they took it from another show and applied it to the show. It was just totally unrealistic and not even close to being watchable for the general population.

I am very disappointed that this show got the axe. This show was hilarious! I watched the show every week. I could not wait until the next episode. I was so elated to see Mike Epps with his own show . He deserved it. Every time I get invested in a show that is really good and entertaining it gets the axe, but a show like Bones stays on forever.

What no way so funny supid people you need to watch every week record waste of my time if record you live every week understand that what people need to get good ratings.

WOW! A show with ratings above a 1.0 CANCELLED.