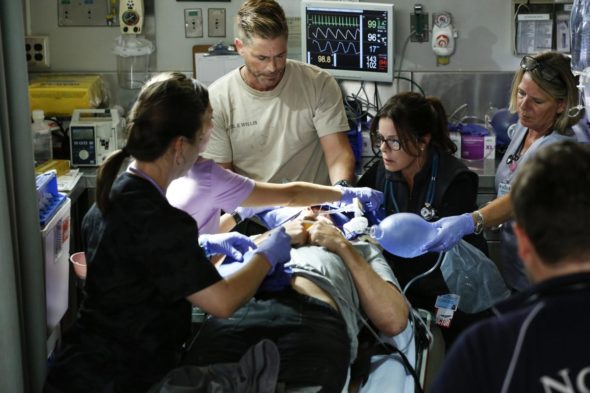 In the interview, Seitzman revealed there will be some closure for the series finale of Code Black, which is slated to air on CBS on July 18th at 10 p.m. ET/PT:

At the end of every season, we’ve ended the season to be a story ender for everybody so there’s a sense of closure not just among the audience who we make the show for but also for ourselves. The third season had the added specter of a possible cancellation, which made it more urgent for us to create something for every story that felt like an ending to some degree.”

Read more about the series finale below:

ANGELS MEMORIAL DESCENDS INTO CHAOS WHEN A PLANE CRASHES INTO THE HOSPITAL, ON THE SERIES FINALE OF “CODE BLACK,” WEDNESDAY, JULY 18

“The Business of Saving Lives” – Angels Memorial descends into chaos when a plane crashes into the eighth floor. Also, it is up to Mario to save Noa’s life when she has a car accident. In addition, Willis admits to Rox that he needs her in his life, and the doctors gather in court to support Leanne for her custody hearing, on the series finale of CODE BLACK, Wednesday, July 18 (10:00-11:00 PM, ET/PT) on the CBS Television Network.

What do you think? Do you watch Code Black? How do you want the series to end?

something is wrong here. read the viewer votes. everyone loves this show
https://tvseriesfinale.com/tv-show/code-black-season-three-viewer-votes/

I’m so pissed. How can take this show off the air. Code Black showed how to care for others,to show respect, to give love and support to become a family.

it’s a shame that CBS cancelled such an excellent show. Was shocked and sadend. I always looked forward to watching it.

I really cannot believe that such a popular show is being put up on the chopping block. We love these characters as if they where our own family. There are not many shows that show compassion, love for one another, and adversity thru difficult times. You have “altered our space and time” as Marsha Gay Harden’s character stated in this evenings episode. Please reconsider cancelling this show

Code Black was one of THE BEST written and superbly cast and performed dramas on television. There are so many unintelligent shows on television anymore that it is difficult to find shows worthy of watching. I find it very sad that the networks cater to moronic entertainment and place excellent shows in either poor time slots or poorly advertise them. I’ve come across many people who never even had heard of Code Black. Very sad to see it end, but the last show tonight was as spectacular as every single episode had been for the last 3 seasons. Best wishes… Read more »

I’m so sad to know Code Black has been cancelled. It was one of the most honest and true to life programs on television today. I truly enjoyed it’s run and would like to commend each and every cast member and everyone else associated with the series for a memorable three seasons Thank You

Just finished watching tonight’s episode.
To those responsible for cancelling the series,
What the hell are you thinking?

I am so sad to see this show end. I love the characters, the story, all of it. Why is it the good ones get cancelled?!

Really hate that this was the last show..CBS sucks, Best show on air.

This sucks. We love this show. Please DO NOT CANCEL this great show

I never write comments on these, but I am so disappointed that tonight was the series finale. Way better than other medical shows on tv!!!

I watch Code Black and I am beyond disappointed that it is being cancelled.

please bring it back it’s one of the few programs i wait for every week….

It is a shame with all the stupid reality shows on tv now that cbs has decided to take a Code Black off the air.
What are you thinking??
I have watched this show every week and with all the drama in each of the characters, I can’t wsit for the next week to come to see what happens next.
PLEASE!! Reconsider your decision and don’t let us die in s sea of Housewives (who have no lives), Bacholors and Bachlorettes, and the rest of the other loser reality crap.