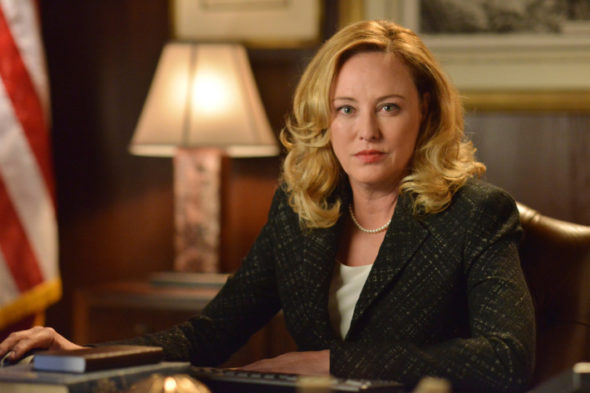 Designated Survivor is losing a core castmember. TVLine reports Virginia Madsen will not return for season two of the ABC TV series.

On Twitter, Madsen said her exit has to do with creative changes on Designated Survivor. However, all may not be lost. Madsen did mention she’d love to return to the ABC show in the future:

What do you think? Are you a fan of Designated Survivor? Will you watch season two without Virginia Madsen?

DS started strongly but I started losing interest when it got preachy. I don’t care if I agree or disagree, I don’t want to be preached to while watching a show. If I want that, I’ll watch C-span. perhaps the creative change will incorporate elements of Brain Dead. Brain Dead summed up Washington DC rather well and at times was more realistic than DS.

Yep, I love the show, i would still watch it.

DESIGNATED SURVIVOR IS ONE OF THE BEST SHOWS TO COME TO T.V .IN SEVERAL YEARS. GREAT PLOTS, SUSPENSEFUL . A SHOW I LOOK FORWARD TO WATCHING. KIEFER SUTHERLAND IS MY KIND OF PRESIDENT . PLEASE GIVE THE SHOW A TRY AND YOU TO WILL BE HOOKED.

I love Designated Survivor. It is one of the current best shows on tv.

We loved DS at the beginning. It was on an even keel. But stopped watching when that ABC liberal directive set in…maybe VM felt that way too. Hope the writers get back to the original.

I must admit the “creative changes” are scaring me a little – I like it as it is very much, and this included the balance that Hookstraten (very well playes by Virginia Madsen) character brought to the action. I for one will meiis this excellent actress from this show that was perfect for her. I hope she does manage to plan a comeback with full force!

I am a HUGE FAN of “Designated Survivor” & am THRILLED that it will return 4 Season 2! Have been a “24” fan forever and its great star Kiefer Sutherland! I love political drama and especially this one!! Great show!! Pvnb

I will definitely watch season 2 of Designated Survivor! It’s one of our favorite series and yes I will also miss Virginia madsen’s character. She’s a good actress and hopefully she will be back on the show soon.

we love this show and we will continue to watch. We will miss her role and wonder how she could return later on. Perhaps she will be taking a leave for medical issues and when recovered she could return. I hope the creative changes are not so drastic that the show dies.

That’s a shame because Hookstraten is a key character,never knowing exactly which way she will turn next.

Creative changes is a concerning statement because if they make too much of a change to what has been a successful format, then it may spell danger for the shows future.

One of the best shows on TV. We really enjoy it.

Great show; actually it’s our most favorite! We were hooked after the first episode and we get so excited about it that sometimes we force ourselves to wait 2 weeks so we can watch two episodes in a row because one is just not enough!