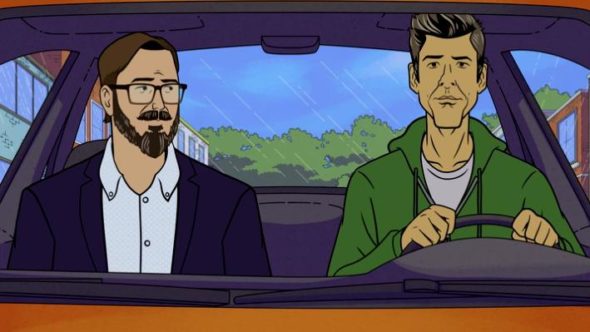 Dicktown is returning to FXX. The cable channel has announced a standalone premiere date for the adult animated comedy series from John Hodgman and David Rees. The show revolves around a famous boy detective (Hodgeman) and his former bully (Rees) who solved mysteries in a small town. Decades later, they’re still at it and struggling to figure out how to grow up.  The characters’ initial adventures (considered to be the first season) were part of the third season of the channel’s short-form anthology series, Cake.

FXX revealed more about the return of the series in a press release.

“FX has set the premiere date for Dicktown, the half-hour animated comedy series created, written and directed by John Hodgman and David Rees. The new season of Dicktown will premiere Thursday, March 3 at 10 p.m. ET/PT on FXX and stream on Hulu. The premiere and the four subsequent episodes on Thursdays will each feature two 15-minute segments.

John Hunchman was once the famous boy detective of Richardsville, North Carolina (DICKTOWN, to the locals), but now he’s pushing 40 and still solving mysteries for teens. David Purefoy, his former bully, is now his driver, muscle and only friend. Between chasing down stolen pimento cheese recipes and high school mascots gone rogue, John and David never stop trying to solve the biggest mystery: how to grow up. But when a menacing figure roars into their lives on a weird motorcycle-car, they learn the past isn’t done with them yet.

The first season of Dicktown was part of season three of FX’s Cake and is now streaming on Hulu.

Never too old to be a boy detective. Created by @hodgman and @david_rees, Dicktown premieres March 3 on FXX. Stream on Hulu. pic.twitter.com/FnnhnRrfUv

What do you think? Are you planning to check out the return of Dicktown next month?