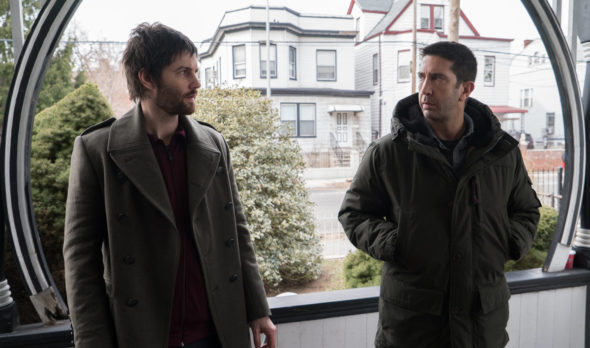 Dang. I really enjoyed this one.

Stupid people – marketed poorly – clearly the show’s on an inept network. Acting/writing, all top notch. Sturgess is outstanding playing the jerk role. AMC should sell the rights to another network so the story can continue.

My husband and I looked forward to this show every week. I don’t understand how they can cancel it. Out of some of the other shows they air, this is not one that I would have thought they would cancel

My husband and I loved this show! I don’t understand how you can expect that a .13 is a valid rating on only 10 episodes. Maybe AMC should take a look at these comments and rethink their obviously erroneous conclusion that the show won’t attract more of your target audience. With so many channels and an almost equal amount of new shows a run of at least 2-3 seasons would give the “target audience” a better chance to show their enthusiasm toward this exciting and addictive show!

So very upset Feed the Beast is not returning! Love this show, and really ended with too many questions! Please please please bring it back!

Loved the show!!! Thought they made a great team. First couple shows a little slow, after that,was really good. Funny and serious. Bring it back!!! More people are talking about it!

Sad that the show was canceled I hate when you can’t wait for them to come back only to find out its over. 🙁

So sad. Great show. Plus, they ended with a cliffhanger!!

Please bring it back!!!! It’s a really good show with really good acting. I don’t think too many people knew about it. AMC needs to give it another chance and advertise it more!!!!

Feed the Beast was our favorite show! Bring it back PLEASE.

Loved this show SO MUCH bring it back…please!

wtf……a super show gone too too soon ….if you come back look me up i’d get those ratings up!

I only regularly watch a handful of shows. I NEVER missed Feed the Beast. Absolutely loved it. Drama, sentiment, parenting struggle, deep friendship, temptation crime and evil, family, and attention to food all made the show and it’s characters interesting, flawed, and real.

I am so disappointed! I thoroughly enjoyed Feed the Beast.