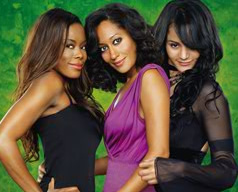 As discussed here on Tuesday, the long-running CW sitcom, Girlfriends, is saying goodbye after eight seasons. As tough as that is for fans of the show to hear, it’s made even worse by the notion that the show won’t be going back into production to film any more episodes to give some sort of closure for the characters.

It turns out, as one might expect, that the reason is pure economics. The CW network has said that they’re only resuming production on TV series which the network is considering renewing next season. Since the ratings have been down for Girlfriends, they’re canceling the sitcom and that apparently makes it a lame duck.

Orlando Sentinel’s Hal Boedeker reports that a spokesperson for the CW said, “This was a very difficult decision for us, and was based solely on the considerable cost to license each episode in an extremely unusual business environment.”

But wait, after bringing the CW and UPN networks millions and millions of dollars in ad revenue over the past eight years, don’t the show and it’s fans deserve a proper send-off?

Girlfriends creator Mara Brock Akil is philosophical about the cancellation and said, “Although it’s always difficult to say goodbye, I choose to focus my energy on the history that Girlfriends has made, the human stories that we told, the beautifully complex images that we projected and the blessings 172 episodes bestowed on us, both personally and professionally.”

She went on to say, “I am immensely thankful to the amazingly talented cast, writers, directors, staff and crew for their endless dedication and hard work for eight seasons, to the network that always wanted us and the studio that always supported us, but mostly to the audience, especially African-American women, who took the time to tune into us every Monday night at nine to have a dialogue with us and who have been our partner in this journey.”

As far as the series finale, it looks like it will indeed be some sort of compilation of clips. Akil said, “I am currently in talks with the studio and network on putting together a retrospective show which will honor and celebrate this landmark series, so please stay tuned.”

This situation was typical. I figured this decision was in the making when the network changed the airing time of Girlfriends to Monday nights at eight. Coincidence that it’s set at the same time as Monday night football. I feel that decision was made to decrease ratings, which in turn would cover the reasons for cancellations. They should have left Girlfriends on Thursdays. Then in the end denied a respectible and conclusive series finale.

I’m very upsest that the series Girlfriends is comming towards a close. Through out the past eight years I Have enjoyed te series sense I was 9 years old, yes nine. I wish many blessings for the cast and crew because I feel like the series have changed my life. I will have a hard time trying to find another telivision show just as funny, exciting, and spectacular as Girlfriends.

I think it’s very sad this show has been on for 8 years and they could not it a proper ending 2 leave the fans hangin like that did joan get married? how did william and monica handle beingn parents. Did mya get her baby girl how did len singing career do. they need to finsh these storyies that we have followed all these years.

It’s a shame that a show that was successful for the network for 8 years does not get a proper send off. i have seen show after show do a season finale and some had been on the air less than 8 years. I know African-American shows have to struggle to gain a audience and UPN/WB and now the CW billed itself on being the network for African-Americans. Now it totally disregards those viewers by not giving one of our most beloved shows the proper send off that many other “main stream” shows receive. CW for once think about the… Read more »

happy this show is over because they should have worked together and helped my girl jill, what goes around always come back and bite you bye

I’m devasted that Girlfriends is not returning. I was wondering why there were only showing re-runs. Girlfriends was the one show that I would never miss. A show that showed positive, successful black people. As a black woman I identified with all the women on the show. It is a slap in the face that they are not even closing the show with a proper finale. 8 years and you don’t do a finale! I’m so tired of the networks cancelling shows that show positive black people. The only thing that the networks want to put on tv is trash.… Read more »

I’M PISSED! I loved all of the characters! Joan’s character in particular encouraged my friends and I to become successful black women. The three of us are under 25 and are working on our Master’s Degrees. We envisioned working a 9 to 5 and then meeting at the bar for drinks on the weekend. There will probably never be another show that has beautiful black suceccessful African American women!

That sh#% ain’t right! I’m upset! Girlfriends is the show. Why CW is cancelling all the good shows that was from upn. One on One, Half and Half, Cuts, All of Us, and now Girlfriends. Whats up with everybody hates chris did they cancel that too. Hopefully they won’t cancel the game. Why they cancel the african american shows?

I didn’t want to believe that the show was cancelled. I just stopped watching this Monday when they ran the episode where Lynn is performing at the park. I am a young African American woman and this is the only show that gave me positive black women to look forward to seeing on TV. If they can give Sex In The City a movie, I know they can give our Girlfriends a movie if not some special on cable or DVD. It was not right how they brought us so close to Joan getting married, Lynn’s music career taking off,… Read more »

I am more than a little upset that Girlfriends has been cancelled. What makes me more than a little upset is that some of the only quality black shows on tv are reruns of older shows. I don’t do reruns unless I have to and I don’t like having to. I think it is time for BET and TVone to step up and give us some quality shows that aren’t reruns. I’m sick of hoping that the other networks will do it. As history has shown us if they do it will only be short lived. Yes I think 8… Read more »

Totally upset, Well I am quiet disappointed by the cancellation of Girlfriends. I have waited ever so paciently to see a final, and nothing. It seems as if every show that I watched is cancelled for some reason or another. First things first they always cancel without some final episode. There isn’t enough black shows to begin with. Than this, how unfair. I wanted Joan to get married, have a baby, and her relationship with Tony to be restored. I wanted Lynn to find happiness and have her singing career take off. Also for Myia and Darnell to conceive or… Read more »

Just like everyone else I was watching the reruns. I was checking on Sunday and Monday, eagerly waiting for the new shows to air. I just happened to read CANCELLED Girlfriends while I was looking for yet another show I enjoy. It is truly sad to turn on the television and not be able to find a show that I can identify with. As a black woman, strong, smart, funny,sad, angry,scared,in love, out of love. The rainbow of emotions I feel , good and bad relationships, family drama, friendship drama. My Girlfriends reflected that. I loved that show, those women… Read more »

Girlfriends should have a proper close. How about straight to DVD for fans of the show. After eight years of the show, there should be closure!