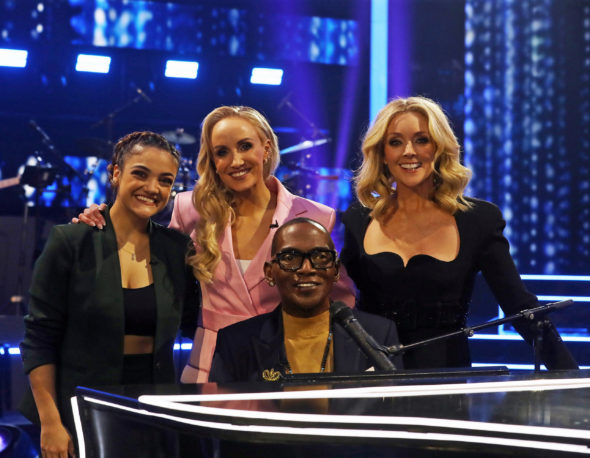 Are celebrity contestants as fun to watch as regular ones? Has the Name That Tune TV show been cancelled or renewed for a third season on FOX? The television vulture is watching all the latest cancellation and renewal news, so this page is the place to track the status of Name That Tune, season three. Bookmark it, or subscribe for the latest updates. Remember, the television vulture is watching your shows. Are you?

Airing on the FOX television network, this newest iteration of the Name That Tune series is hosted by Jane Krakowski with Randy Jackson leading the in-studio band. The competition tests contestants’ music knowledge as they battle it out in an assortment of challenging musical games for cash and prizes. Each hour episode is comprised of two stand-alone half-hour contests. Two players play against each other as they race against the clock to test their knowledge of songs. Each contest features a rotating variety of games from the original format, before the iconic Bid-a-Note round. The player with the most money at the end of Bid-a-Note wins the game and takes his or her bank into the Golden Medley bonus round. There, the player has a chance to win additional cash and potentially the $100,000 grand prize. The second season features celebrity singers, actors, Olympians and NFL champions, all playing for their favorite charities. Contestants include Jodie Sweetin, Frankie Muniz, Jennie Garth, Ian Ziering, Kelly Osbourne, JoJo, Shaggy, Kim Fields, Tituss Burgess, Mel B., Cassadee Pope, Jana Kramer, Laurie Hernandez, Nastia Liukin, Vernon Davis, and Victor Cruz.

The second season of Name That Tune averaged a 0.30 rating in the 18-49 demographic and 1.60 million viewers in the live+same day ratings (includes all DVR playback through 3:00 AM). Compared to season one, that’s down by 48% in the demo and down by 40% in viewership. While these numbers don’t include further delayed or streaming viewing, they are a very good indicator of how a show is performing, especially when compared to others on the same channel. Though other economic factors are involved, the higher-rated shows usually get renewed and the lower-rated ones get cancelled. Find out how Name That Tune stacks up against other FOX TV shows.

Will FOX cancel or renew Name That Tune for season three? This show has been a moderate success in the ratings for a FOX series, has brand recognition, and appears relatively inexpensive to produce. I think that it’s got a good chance of being renewed. I’ll update this page with breaking developments. Subscribe for free alerts on Name That Tune cancellation or renewal news.

What do you think? Do you hope that the Name That Tune TV show will be renewed for a third season? How would you feel if FOX cancelled this TV series, instead?