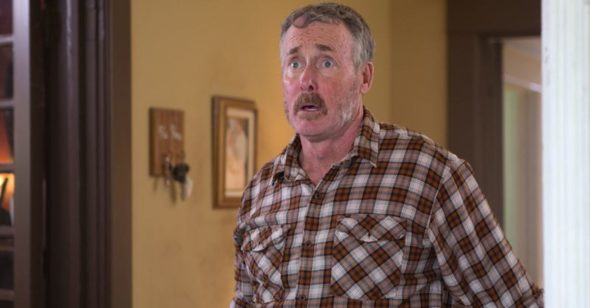 Has Stan Miller’s devil’s bargain paid off? Is the Stan Against Evil TV show cancelled or renewed for a fourth season on IFC? The television vulture is watching all the latest cancellation and renewal news, so this page is the place to track the status of Stan Against Evil, season four. Bookmark it, or subscribe for the latest updates. Remember, the television vulture is watching your shows. Are you?

An IFC horror-comedy from creator Dana Gould, Stan Against Evil stars John C. McGinley, Janet Varney, Nate Mooney, and Deborah Baker Jr. Guest stars in season three include Scott Adsit, Maria Bamford, Matt Braunger, Christopher Mintz-Plasse, and Eddie Pepitone. Set in a seemingly quaint but haunted New Hampshire village, the story centers on disgruntled former sheriff Stan Miller (McGinley). This installment kicks off right after last season’s finale, when Stan traveled through time to save his dead wife, which opened a portal between the Land of the Living and the Land of the Dead. Now he and Evie (Varney) must deal with the evil forces taking over Willard’s Mill —- which could involve making a deal with the devil.

The third season of Stan Against Evil averaged a 0.04 rating in the 18-49 demographic and 125,000 viewers. Compared to the season two, that’s down by 31% and 27%, respectively. Find out how Stan Against Evil stacks up against other IFC TV shows.

Will IFC cancel or renew Stan Against Evil for season four? Well, IFC TV series do so poorly in the Nielsens ratings that it makes it hard for a hungry television vulture to predict that, never mind plan for dinner. AMC Networks owns IFC and it seems to be more of a creativity lab for the parent company than a breadwinner. Still, they want to attract viewers and run programming people actually watch, so at some point, viewership matters. I suspect this will be the final run. I’ll update this page with any new developments. Subscribe for free alerts on any Stan Against Evil cancellation or renewal news.

What do you think? Should IFC have cancelled the Stan Against Evil TV show or renewed it for a fourth season?

This show needs to keep going! It is amazing! I can’t believe that it could ever me canceled.