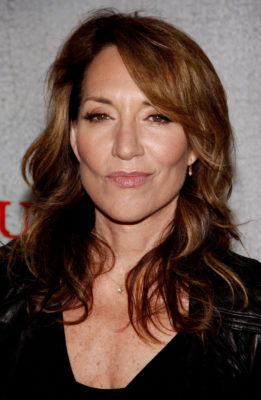 A familiar face is returning to The Conners. TVLine reports Katey Sagal will recur on season two of the ABC TV show.

In the first season of The Conners series, Sagal guest-starred as “Louise, a former high school friend of Dan and Roseanne’s who left Lanford to pursue a career in music.” Now, it looks like Louise is back. According to TVLine, Sagal will have a “significant” storyline in season two of The Conners.

What do you think? Are you a fan of The Conners? Are you excited for the new season?

I have Loved the original Rosanne. I refuse to watch the Conners. After what they all did to Rosanne, for a mistake she made. Guess what it just shows she’s human and made a mistake!
Sara Gilbert: GET OVER IT!!!
None of them would be where they are today if they hadn’t gotten their start on the, Original Rosanne.
Have they forgotten who they should Thank for That.
I will NEVER watch anything anymore with Goodman in it. Or anyone else in the Conners cast. I call them ALL Turncoats.

I think the show is way to political that disappoints me really. Dont want politics all the time this show gave us a lil break but not so much anymore.

I like the show. I don’t care for Katy Segal. So i may watch the 1st show and decide.

I love the Conners

I love the show Roseanne! The Connors is not the same without Roseanne.. it’s not as funny as it used to be. Even Darlene who also used to be the funny witty one is so far from it now. I understand what Roseanne did was wrong.. but let’s not forget we all make mistakes! We’re all humans.. whatever happened to forgiveness??! Was going to the extreme of removing her and keeping her out of the show necessary?… absolutely not!

I love the Conners more now than with Roseanne she was not funny her sister is love the new spin.

I like the show now even more since there is more diversity but there needs to be diversity issues in lanford.

I thought The Connors was better than the Roseanne revival by far. It’s up there with the original series. The simple fact is that Roseanne can’t act very well. Still, she blended in perfectly with the original series. But the revival season was pretty much jist an excuse for her to high-horse and shoehorn in her political views. Katy Sagal was great in her episode from the first season of Connors, and I couldn’t help but think that of all the possible directions they could have gone, her past resume made her the absolute perfect choice as a new love… Read more »

I loved the show. I honestly didn’t miss Rosanne all that much. Do I think what ABC did to her is wrong? Absolutely! I don’t believe the other extremely talented cast & crew should suffer because of it though. I think Katy is going to be a great addition & I hope they make her a love interest for Dan.

I agree I love the show

Won’t Watch Until They Bring Back Roseanne.

As a zombie? The walking dead could use her perhaps.

Could not care less. The show will never be more than Roseanne light!

Who’s actually watching this show? If so, what’s your deal? Lol

i like comedy and cast and the writing… what’s your deal? lololol

This show is so low in the ratings that the only reason it is still 9n is because ABC doesn’t want to admit that without Roseanne it stinks.

Wake up and read the real ratings. It is very low in the ratings.

What are you talking about? The Conners had the highest ratings of any scripted show on ABC last season. Numbers don’t lie. They wish they had more shows with those ratings.

You must believe everything trump says too…if I remember correct, only two shows had more viewers last season: Sunday night football and This Is Us. I’d say a lot of people are watching.

You are ABSOLUTELY RIGHT! But if you see what ABC keeps on the schedule the only thing we watch is THE ROOKIE now that Roseanne is gone. The Connors cast should be ashamed of themselves!