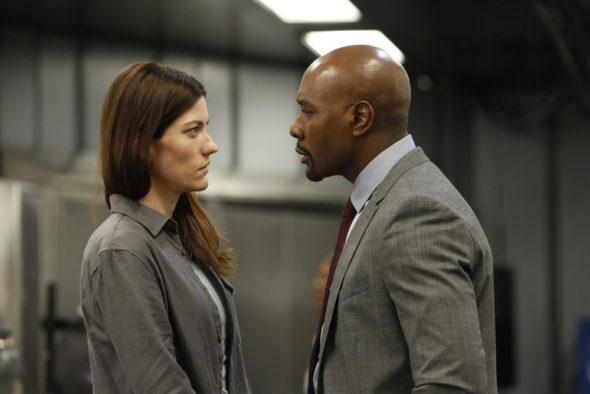 While Shepherd was once one of the CIA’s more gifted agents, she is now infamous for betraying the US and is currently serving out a life sentence in a supermax prison. Unfortunately for Keaton, he is in dire need of her expertise.

Even though it goes against his every instinct, Keaton enlists Shepherd in his effort to track down a dangerous fugitive, because she knows more about the target than anyone, and can think like a spy. Will and Erica may be motivated by different reasons, but they both know they must bring this perp to justice. One question remains: can Keaton trust Shepherd? Stay tuned.

Series Finale:
Episode #13 — Sierra Maestra
Tal’s war on the CIA expands to two fronts. Keaton and the Cointel team must locate the domestic target before Chigorin launches an all-out assault on the unsuspecting innocents. Shepherd convinces Keaton to let her go to Cuba to thwart Tal’s attack on Sierra Maestra, the CIA’s secret detention center imprisoning his operatives. Shepherd’s ever-shifting allegiance raises the question if she is there to stop Tal or join him?
First aired: May 20, 2019.

What do you think? Do you like The Enemy Within TV series? Should this NBC TV show have been cancelled or renewed for a second season?

love the show, one of the few I go out of my way to watch each and every week a 5 thumbs up to all that put the show together and on the air

Excellent show that doesn’t pander to the ignorant.

I absolutely love this show!!!! Please renew! So much better than most of the other crap on TV.

Winner – we love it

I also cannot wait for each new episode. Actually excited for it. Cannot wait to see when she gets to see her daughter again!

Please renew this show. I really love it. Yes’m it is different than most, but that is what is so cool…the way she will study, then look in and tell him what she thinks. And the way they interact, but Keaton is different with her. It is one of my most favorite shows. Please keep it! The others don’t trust her, but rely on him….except for that new ? Who now doesn’t trust him. Lots of places to go. Please don’t cancel!

Hope there is a season 2. I have enjoyed the 1st season so far

Love the enemy within

Hope show has a season 2

Awesome series…hard to wait for the next episode.

Can’t wait for each new episode. Reminds me of the series 24. Intense!!