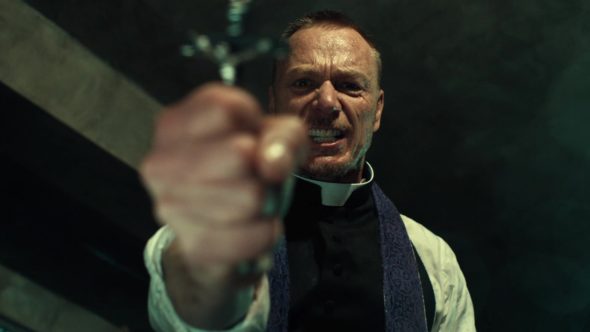 Tonight marks the season finale of The Exorcist TV show on FOX. How’s this horror TV series been performing in the ratings? Should the network renew this series for a second season or, should it be cancelled instead?

The Exorcist series launched on September 23rd and attracted a 0.97 rating in the 18-49 demographic with 2.85 million viewers. Even for a Friday night series, this was a disappointing start in the ratings. Unfortunately, the ratings have only gotten worse as the season’s progressed.

In week two, the demo rating dropped nearly 40%, falling to a 0.6 rating with 1.976 million viewers. Some later episodes have risen to a 0.7 in the demo but total viewership has either remained about the same or dropped even lower. Episode seven hit a season low with a 0.6 in the demo and 1.61 million.

Based on these ratings alone, The Exorcist will surely be cancelled. It seems that fans’ best hope for a second season renewal is if the studio and network have found alternate ways of making this series profitable for them.

But, what do you think? Do you still like The Exorcist TV show? Do you think that it should be cancelled or renewed for a second season on FOX?

Renew the exorcist, one of the best broadcast TV shows in years.

Please keep it, I LOVE this show!!!

Friday at 9pm is an awful timeslot. Put it up against one of those mind-numbing CSI shows we’re all sick of!

This is an incredible show. Might have been on the wrong Fox network. Thinking Fox should consider a marathon of this season on FXX. Could help boost interest for a season two which I hope we get.

Renew it for sure. Everything about it, is so well done.

I’m typically skeptical of series based on films I love, but I thought this was exceptionally well-written overall. It’s really too bad more people didn’t give this a chance, as those who did seemed to be in general agreement that it’s at least a good series. A great one, in my personal opinion. Here’s hoping it gets some sort of second shot.

Thank you for such a great, well put comment. I totally agree and believe that this series was not only suspenseful due to the Occult nature but just plain well a very well acted drama! I would love to see a second season, period.

This show does not glorify Satan. In fact, it depicts the spiritual battle between Heaven and Hell that actually exists all over the world. If you were watching the show, you would have noticed that God won in the end. This show should definitely come back for a second season because it’s the first show that actually depicts the true battle between Heaven and Hell. There are some areas that could be more Biblically accurate, but overall it’s a story that needs to be told. I’m just not sure if the general public is ready to face this topic, because… Read more »

You presented some ideas that really make sense. Thank you for writing them down for all of us to actually think about.

Its my favorite show! Please dont cancel! Weve been waiting decades for a good horror suspense television show! Great acting by all involved!

No way should this series be cancelled! My partner and I love it!! I’m sure the writers have already written the next episode?!
That’s what I like to hope anyway!.

I have watched the Exorcist from the first episode to the very last. I have enjoyed the whole season. I do hope they will reconsider cancelling that series because, I loved it!

I hope they renew it! TBH it was slow at first but it DID get better!!!!

It should be canceled as it glorifies Satan.