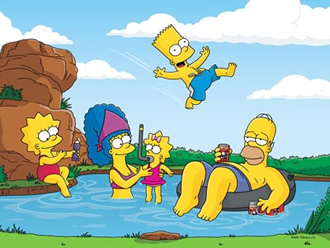 FOX’s animated phenomenon, The Simpsons, is currently in its 21st season. The ratings aren’t what they were a few years ago but they’re still pretty good when compared to the other animated FOX series.

Still, nothing can last forever. How long will the show go on before the network gets tired of it and cancels The Simpsons?

At the Television Critics Association press tour, FOX Entertainment President Kevin Reilly said, “We have it for two more seasons and then we’ll sit down and see where we are.”

He continued, “The show is extraordinary. We just celebrated twenty years. I’m certainly not gunning for it. It’s still creatively vibrant. The show is up again this season. It’s just mind-blowing the breadth of creativity that’s still coming out of that camp.”

What do you think? Would you like to see The Simpsons keep going or is it time for the show to be over?

Please, leave it, yes, im young and 12 but they have kept me watching fox, it keeps me from that family guy crap, the cleveland crap, and probally bobs shiz.

i LOVE this SHOW i NEVER want to see it canceled its like the BEST SHOW ever. i honestly think it KEEPS getting better as the years go by i mean the earlier episodes are good too but they just keep getting better DONT cancel simpsons its like one of the few shows i like on fox i like most of the animated shows but the new one BOBS BURGER or whatever its called looks way dumb i would much rather see SIMPSONS then stupid shows like that. so please DONT cancel simpsons they ROCK!!!

I watched simpsons sinse 2003 i was 9years old and im 16!Plz do not cancel!! I love this show!! Its unusual diffrent from the other shows!! Not like family guy, or futurama,!!This is the best cartoon show that was ever made!!You could create a new character in the simpsons family if u want!! And u will have something diffrent to tell!!

dont cancel the simpsons they rock homer is dum but funny dum he makes me lol….best show ever

I just love’ em, I cant stop laughing at homer.
I just dont want it to be over, Matt is awesome and his talent enormous.
The simpsons made fox hit the clouds in past seasons, they should make more seasons, and also a forum to give a lot more funny ideas to Matt to continue the show.

I can’t see the Simpsons going out like that. They have saved Fox from obscurity so many times that they can do whatever they want. Just look how many cheap shots they take at the network! Anyway, the simpsons will go for a couple more years, probably spin out one more movie and be done. On Groening’s terms, not a network exec’s decision.

I absolutely love The Simpsons. It will always be my favorite cartoon comedy as I have grown up with the family. But, I believe the show should have ended its run years ago. I can’t even bear to watch the recent seasons (18+) because they are absolutely stale and unfunny. I haven’t been able to laugh as much as I could have watching the older seasons. The older seasons were genius with memorable jokes and situations (like the time Homer saw the alien and was being questioned by Mulder and Scully — hilarious) but the newer ones have nothing. The… Read more »

Kill it at 25. make it a respectable ending. Seinfeld sucks, Frasier sucks, Family guy sucks, cleve? sucks. whats the other one. it sucks too. Simpsons is awesome but they should retire it with style after 25. Maybe 1 more movie, although I was disappointed with the end of the first one.

Cancell the Simpsons?( the main reason I watch TV)- while broadcasts like Seinfeld or MASH continue unabated ? People still watch the Simpsons wheras the other two shows lost their audiences decades ago but still block the airwaves. How many times can Seifield show the same episodes Over and Over without being dropped whereas theres 20 years of simpson (x episodes per season) they wish to cancel. Somethings not being said here. I count the episodes of seinfeld reruns as 20 to 1 vs ‘the Simpsons’ But there I go making sense again. Thank the lord I have my Simpson… Read more »