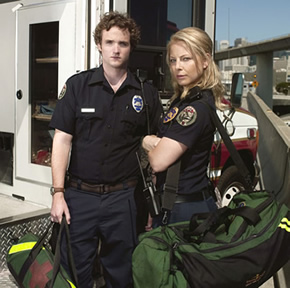 Keep TRauma!!!!! This is ridiculous they are cancelling this show. It is entertaining and we enjoy it very much – how in the world can they keep Jay 5 nights a week and cancel such a great show with great actors – Keep Trauma please!!!!!

I don’t understand NBC -everytime they get a good show they cancel it for foolishness. That is why I am a CBS fan but came backto NBC for Trauma. Poor judgement. Good shows that make people see the good in people is cancelled for stupid shows. Whoes making the decisions at the top tells you they have no judgement or sense.

keep trauma; get rid of jay!!!

I think its a shame that they would cancel “Trauma” especially with actor Derek Luke. What were his directors and producers thinking about allowing Trauma to be put in the Monday night, slot with so many competition. It’s really hard to get new viewers when they’re already addicted to another show. I’m assuming that most of the viewers from the others shows haven’t even looked at “TRAUMA” once. Move it to another time or day. I don’t want to see it cancel. Another problem is allowing someone in the series to portray being gay which really causes a the show… Read more »

keeo trauma cancel jay and mercy Nbc dont know good shows anymore Like southland,life and my own worst enemy was good shows But to NBC jay is the best thing ever But he sucks

Terrible!! I say cut the show now, and give Chuck (one of my fav. shows) more episodes!!

I look foward to watching this show every Monday night. There is so little that is good to watch now that a well acted program is a gem…..please keep this on and get into the characters more. People be patient.
sjl

PLEASE keep it! I love the characters and we’re just getting to really know them. I think this show has great potential!

keep on going…. keep Trauma… It will be excellent…..

I think tha trauma, will improve. Once they get into the attributes of the character’s strengths it can be dynamic. The writers will eventually get the pulse of the city and the flavor of the bay area. The San Francisco Bay area is a gold mine. Its time to invest in it and watch the show grow into a strong representation of the city’s flavor. Give it a chance it not just about $$$. Its about making a product work. I remember ER, Ben Casey, Trapper John, Streets of San Francisco. Writers get into the characters! The aforementioned took a… Read more »

Beyond the natural tendency to play voyeur to my own neighborhood (“Hey, there’s my apartment!”), there is no stickiness to this plot. I think about how much television has changed since ER first aired in 1994 (95?), and I wonder if this type of show will ever have the same sort of legs it once did, especially without heavyweights like Spielberg and Crichton behind it. As much as I love seeing San Francisco in HighDef (how are more shows NOT filmed in this town – the city is gorgeous from every angle!), the exterior shoots detract from the development of… Read more »

i lovee thiss show! you shouldnt cancel it! it is very interesting ! please dont cancel it….me and my whole family sit together and watch it as a family….only thing we even do together!

I say keep it, it could get better in time and this will give the sf bay actors and crew a little job security =)

I love the show, and plan on watching it every week.