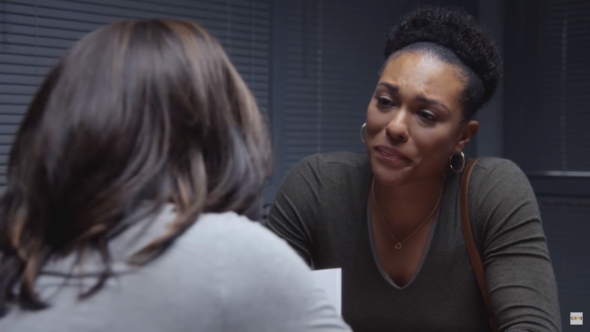 “The wait is over” (almost). If you’re a fan of OWN’s If Loving You Is Wrong TV show, you’re going to have to wait another month for its return. The drama’s fourth season premiere has been rescheduled (again).

Here are the OWN press notes which, SPOILER ALERT, include some episode descriptions:

IF LOVING YOU IS WRONG
Two-Night Season Premiere Tuesday, March 19 at 10 p.m. ET/PT and Wednesday, March 20 at 10 p.m. ET/PT
*The series will regularly air on Wednesdays at 10 p.m. ET/PT
As season four of Tyler Perry’s drama opens, Lushion (Charles “Malik” Whitfield) comes to Kelly’s (Edwina Findley Dickerson) jail cell and discovers an alarming revelation. Across town Alex (Amanda Clayton) and Randal (Eltony Williams) cling to consciousness in a small shed that is burning to the ground around them. Brad (Aiden Turner) struggles as he tries to unravel Alex’s web of lies and the news of the DNA tests hits the city of Maxine very hard. Soon, suspicions cause Natalie (April Parker-Jones) to doubt the strong foundation she has built with Lushion while Eddie (Joel Rush) begins to concoct retaliatory schemes against Larry (Donovan Christie, Jr.), Randal, and Steven (Ryan Haake). Eddie’s anger sends him into a crazy rampage, and as Randal plots to get the upper hand on his competitors, his harassment even expands to include one of the most vulnerable residents of Maxine. After years of abuse suffered at the hands of Edward, Esperanza (Zulay Henao) finally finds love in a very unlikely place.

What do you think? Do you like the If Loving You Is Wrong TV show? Do you plan to watch the fourth season premiere in March?

Yes I Do plan to watch, love that show

Love the show. Love all of Tyler Perry’s work. Such awesome talent.

Love the show. Eddie and Randle are certifiable.