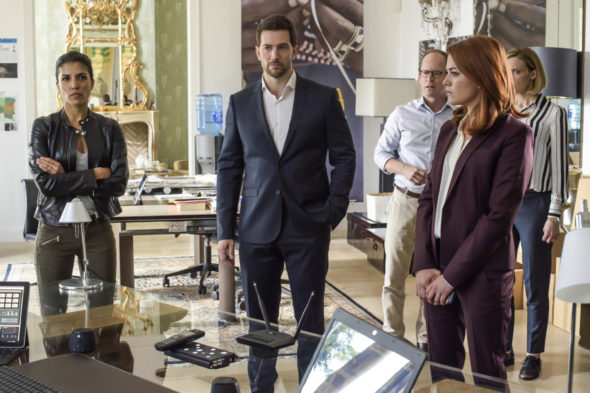 Ransom will be back! Today, Global announced they’ve renewed the TV show for a third season.

The drama, which airs on CBS in the U.S., centers on crisis and hostage negotiator Eric Beaumont (Luke Roberts) and his team. The cast also includes Sarah Greene, Brandon Jay McLaren, and Nazneen Contractor.

Thirteen episodes have been ordered for Ransom‘s third season, which is slated to premiere on Global Television in Canada and on CBS in the U.S. in 2019.

Toronto, Canada – Today Global announced a fourth renewal to its slate of Canadian content for the 2019 broadcast year, as suspense drama Ransom has been greenlit for Season 3. From global studio Entertainment One (eOne), Big Light Productions, Sienna Films and Korda Studios, the 13-epsiode series will shoot in Budapest, Hungary, beginning in October 2018 and premiere next year on Global in Canada and CBS in the U.S. This announcement comes on the heels of Global’s recent renewals for Mary Kills People, Private Eyes, and Big Brother Canada.

“Continuing Global’s dedication to deliver compelling and powerful original content, we are pleased to renew this intense drama for another season,” said Lisa Godfrey, Vice President of Original Content, Corus Entertainment. “Teaming up once again with our broadcast and production partners, we are excited to see what type of high stakes situations the crisis resolution team will be up against next season.”

“We are really excited to see Ransom enter a third season going from strength to strength,” said Co-creator and Executive Producer, Frank Spotnitz. “This show is a true international creative collaboration. We are blessed with a talented cast and honored to have a growing and faithful audience.”

“It is thrilling for us to continue the heart-stopping and adrenaline-driven action of Ransom with its fantastic cast, crew, writers, and our production partners,” said Jocelyn Hamilton, eOne’s President – Canada, Television. “Ransom has found fans across North America and the around the world as viewers tune-in to see the crisis resolution team tackle situations in all parts of the globe.”

With principal cast returning including Luke Roberts, Nazneen Contractor, Brandon Jay McLaren, and Karen LeBlanc, Season 3 of Ransom follows the world of international crisis and hostage negotiating with Eric Beaumont (Roberts) and his elite team as they save lives when no one else can. Eric understands criminals better than they understand themselves and uses his insight into human behaviour to resolve the most difficult kidnap and ransom cases.

Viewers who missed any of the action from Season 2 can catch up on Ransom now on GlobalTV.com, Global GO (available on Apple TV and Chromecast), and On Demand.

Ransom is inspired by the professional experiences of distinguished crisis negotiator Laurent Combalbert, who, along with his partner, Marwan Mery, are among the top negotiators in the world. They travel the globe to help multinational corporations and government agencies with complex negotiations and conflict resolution.

Ransom was created by Frank Spotnitz (The X-Files, The Man in the High Castle) and David Vainola (Diamonds, Combat Hospital) who also serve as Executive Producers. Ransom is a Canada-Hungary treaty co-production, produced by Entertainment One (eOne) and Sienna Films (executive producers) Jennifer Kawaja and Julia Sereny (Sienna Films); Daniel Kresmery and György Rajnai (Korda Studios) are co-producing. The series executive producers include Valerie Pechels and Odile McDonald (Wildcats Productions). Ransom is developed in association with Corus Entertainment Inc., with the participation from the Canada Media Fund, and produced with the financial assistance of the Ontario Film and Television Tax Credit and the Canadian Film or Video Production Tax Credit.

What do you think? Do you watch Ransom? Are you glad it’s coming back?

Love Ransom after watching 1 episode i was hooked. Great cast great story line loviiing it. Please bring back maxine in season 4 yes please renew it and bring her back. Mr.Yates is lonely.

I watched a few episodes of Ransom and I am hooked. I am looking forward for that show to return <
It is well-written as well-acted.
It is intriguing and suspenseful.
It is interesting that each episode takes place in a different country.

Ransom is an excellent drama and should be renewed for many more seasons. Sarah Green should also come back in season 4 if at all possible. The dynamics of the cast is great, storyline is compelling and I’d hate to see this series cancelled.

Yes I am so glad that Ransom will be back for Season 3. It is a great show and should keep going.

HAPPY THAT RANSOM IS COMING BACK. REALLY LIKE IT!

I’m very glad that one of my favorite shows is coming back.

I’m so glad that this show is coming back. It’s one of my favorite shows.

I love Ransom with Maxine – especially with Oliver. Is she coming back? Probably won’t watch anymore if she’s not.

I love Ransom so glad you renewed it. Good acting, very interesting drama. Leaves you wondering.

So glad this was renewed. Love Love Love this show

I love this show. I can’t always watch it on TV, but I always look it up on the computer and watch there. It’s about time a great show that I love wasn’t canceled. Gets the blood roaring for sure.