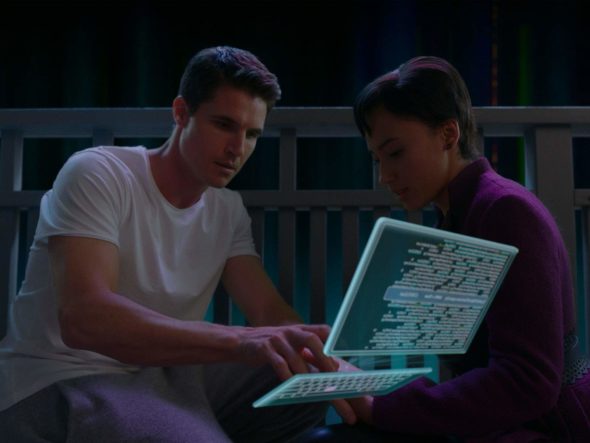 Upload is returning for a second season, and one of the stars of the Amazon show has given an update on what they can expect when the drama series returns. Robbie Amell stars as Nathan Brown in the series which is set in the future where people can be uploaded into a virtual world of their choosing when they die.

The Prime Video series will head back into production in January in Vancouver, per Amell. He said more about what’s next on Upload to CBR:

“I know that Greg [Daniels] and the writers’ room are very deep into the second season. We went in to meet with the writers right before the pandemic; luckily, we got to meet some of the new writers this season. It’s just exciting, I feel like Greg has created such a rich world with so much to explore.

I think you’ll probably get to see a little bit more of the supporting characters this season, which is awesome, I think Zainab [Johnson], Kevin [Bigley] and Allegra [Edwards] are so funny and so talented. I’m excited to see more from them and the show ended on a big moment for a lot of the characters and I’m excited to see where it goes,” Amell teased. “I know we’re in good hands and, again, you never know how a show is going to be received and me and the cast are so grateful and excited for all the fans and we’ve had so much fun sharing the show with them and I still get people finding the show today. We’re really excited about Season 2, not just to shoot it but to see it brought to life.”

A premiere date for season two of the Amazon series has not been set.

What do you think? Are you a fan of Upload? Will you watch season two on Amazon?

when dose season two of upload i thought it would of started by now because last year season one started may 1 and it’s past may first..

My husband and I love it. Where is the second episode?