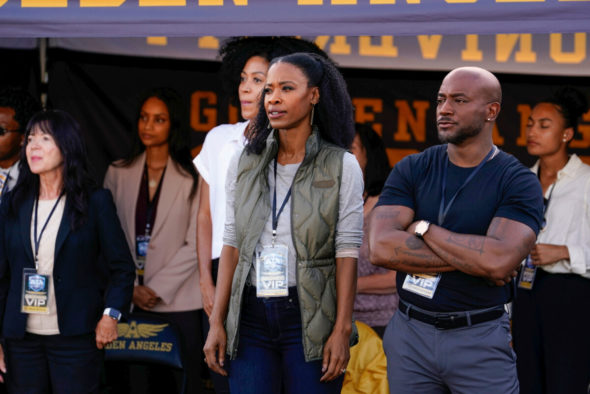 There’s no shortage of drama in college, and Spencer has plenty of his own. Has the All American TV show been cancelled or renewed for a sixth season on The CW? The television vulture is watching all the latest cancellation and renewal news, so this page is the place to track the status of All American, season six. Bookmark it, or subscribe for the latest updates. Remember, the television vulture is watching your shows. Are you?

A sports drama series airing on The CW television network, the All American TV show stars Daniel Ezra, Taye Diggs, Samantha Logan, Bre-Z, Greta Onieogou, Monet Mazur, Michael Evans Behling, Cody Christian, Karimah Westbrook, Chelsea Tavares, and JJ Parker. Inspired by the life of NFL player Spencer Paysinger, the story centers on Spencer James (Ezra), a rising high school football player and an A student who leaves Compton’s South Crenshaw High for Beverly Hills High after he’s recruited by football coach Billy Baker (Diggs). His family life, personal relationships, and athletic future all changed and grew in ways he never imagined. Season five finds Spencer and his friends thriving as young adults on the cusp of real adulthood after high school. Meanwhile, in South Crenshaw, Billy focuses on his high school students and players while struggling with missing coaching Spencer and Jordan (Behling). Even when life gets difficult for our crew, they always find a way to rise from the ashes.

The fifth season of All American averages a 0.13 rating in the 18-49 demographic and 457,000 viewers. Compared to season four, that’s down by 21% in the demo and down by 18% in viewership in the live+same day ratings (including DVR playback through 3:00 AM). While these numbers don’t include further delayed or streaming viewing, they are a very good indicator of how a show is performing, especially when compared to others on the same channel. There can be other economic factors involved in a show’s fate, but typically the higher-rated series are renewed and the lower-rated ones are cancelled. Find out how All American stacks up against other The CW TV shows.

Will The CW cancel or renew All American for season six? The network was previously utilized to air Paramount and Warner Bros. series and didn’t focus on being profitable because the parent companies made money selling the shows internationally and via streaming. Now that the network is run by Nexstar, The CW is shifting toward using acquired and inexpensive original programming to fill the schedule. The goal is to focus on programming that attracts a broad demographic and to be profitable by 2025. The CW cancelled a lot of shows last year but renewed All American, which is produced by Warner Bros. Television and CBS Studios (their parent companies own 25% of the CW network). The show’s done well in the ratings for a CW show, and Nexstar CEO Perry Sook and newly installed CW president Dennis Miller are reportedly fans. I suspect that it will likely be renewed for a sixth season, but really, it could go either way depending on what the new bosses want to do. I’ll update this page with breaking developments. Subscribe for free alerts on All American cancellation or renewal news.

What do you think? Do you hope that the All American TV show will be renewed for a sixth season? How would you feel if The CW cancelled this TV series, instead?

Do not cancel All American. What can be canceled is All American HOMECOMING! That show is terrible but All American is awesome! Everybody I know loves that show! Keep it going please!