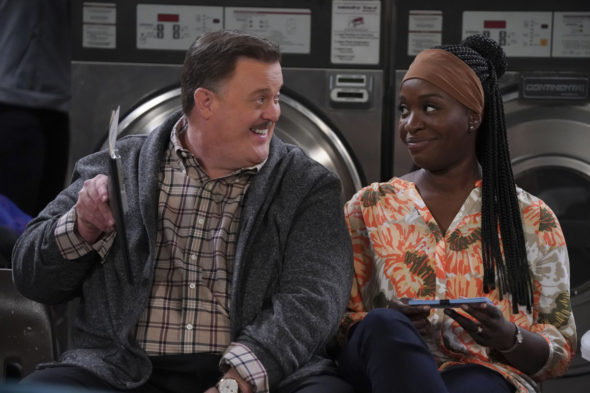 It looks like these two are sticking together for the 2022-23 television season. CBS has renewed the Bob ♥ Abishola TV show for a fourth year.

A CBS A romantic comedy series, Bob ♥ Abishola (read as “Bob Hearts Abishola”) stars Billy Gardell, Folake Olowofoyeku, Christine Ebersole, Matt Jones, Maribeth Monroe, Vernee Watson, Shola Adewusi, Barry Shabaka Henley, Travis Wolfe Jr, Gina Yashere, Bayo Akinfemi, and Anthony Okungbowa. As the story begins, Bob (Gardell) is the owner of a very successful compression sock factory in Detroit and runs the business with his mother (Ebersole), his sister (Monroe), and his younger brother (Jones). The stress of the job lands Bob in the hospital with a heart attack and he falls in love with his cardiac nurse, Abishola (Olowofoyeku), an immigrant from Nigeria. She came to America with her young son (Wolf Jr.) and they live with her Auntie Olu (Adewusi) and Uncle Tunde (Henley). Despite their very different backgrounds and her initial lack of interest, Bob is determined to win Abishola’s heart.

The third season of Bob ♥ Abishola averages a 0.52 rating in the 18-49 demographic and 5.17 million viewers in the live+same day ratings (includes all DVR playback through 3:00 AM). Compared to season two, that’s down by 16% in the demo and even in viewership. It’s the network’s fourth-highest rated comedy of the 2021-22 season. In the live+7 day delayed viewing, Abishola picks up 35% more viewers in the demo and 27% more viewers overall, averaging a 0.70 rating and 6.58 million.

“And on Mondays, the perfect pairing of The Neighborhood and Bob ♥ Abishola continues to deftly blend belly laughs with relatable and culturally relevant storylines, thanks to these exceptionally talented actors and outstanding creative teams,” Kahl continued.

Check out our CBS status sheet to track the Tiffany network’s new series pickups, renewals, and cancellations. You can find lists of cancelled shows here.
What do you think? Do you look forward to watching the Bob ♥ Abishola TV show on CBS? Are you happy to know that it’s been renewed for a fourth season?

I love this show. I look forward to Mondays now. I put it on my reminders so I don’t miss it.

My family and I have been watching Bob Hearts Abishola since the very first episode and we are so glad it has been renewed for a fourth season. There are many shows which are “filler” but Bob Hearts Abishola is an intelligent comedy with strong, funny characters and a message we need to understand constantly-we may come from different places in the world, but the common denominator we have as humans is LOVE. Bravo to EVERY cast member for sharing their talents and providing us with laughter to start the week! Bob Hearts Abishola is the most clever, innovative comedy… Read more »

I, and ALL my friends are THRILLED that Bob ❤’s Abishola is coming back for 22-23. That sbow absolutely makes our Monday… Starts our week off with a smile.

I am so glad CBS has brought families together! As our family watch we discuss the issues. We and growing and laughing together!

This is a show my 8yr old myself and my parents love ….. very entertaining on many levels…. We look forward to it every Monday night .

Well of course it’s going to be renewed where people aren’t really watching any quality TV this type of stuff to exist because people wanna watch something. This is not quality this is just filler. There’s no quality script or genre it’s just wasting time viewing. Everybody knew this was going to get renewed hopefully it won’t last too many more years because this is just junk.

Thank you cbs love it so funny lol . Look forward to seeing it for rest of the season and next season great news.

Love the show but with the ads hardly any show. Needs to be 1 hr.