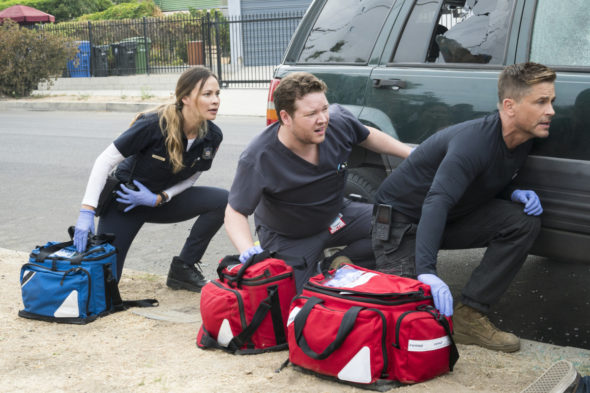 What’s the prognosis for the Angels Memorial ER? Is the Code Black TV show cancelled or renewed for a fourth season on CBS? The television vulture is watching all the latest TV cancellation and renewal news, so this page is the place to track the status of Code Black, season four. Bookmark it, or subscribe for the latest updates. Remember, the television vulture is watching your shows. Are you?

The third season of Code Black averaged a 0.70 rating in the 18-49 demographic and 5.66 million viewers. Compared to season two, it is down by 27% and 5%, respectively. Find out how Code Black stacks up against the other CBS TV shows.

Although it premiered with much lower numbers than the second season, it is still too early to predict whether CBS will cancel or renew Code Black for season four. Last year, the renewal reportedly came about after some licensing fee concessions, so the decision won’t only depend upon first-run advertising rates, but the possibility of syndication earnings, too. Flying blind, I suspect it will score a fourth season to help ensure a decent-sized resale package. Since that’s just speculation though, I’ll keep an eye on the Nielsens and update this page with breaking developments. Subscribe for free Code Black cancellation or renewal alerts.

5/24/2018 Update: Code Black has been cancelled by CBS. Details here. Now I must fly. I have dinner reservations.

What do you think? Did you expect this cancellation? Should CBS have cancelled or renewed its Code Black TV show for season four?

I love watching code black. Ive had to DVR modt of the shows because of my schedule. Its one of my favorites. I hate to see it go.

I cant believe this great show Code Black, it’s honest, compassionate, no bad language or sex.
L’ve all the actors and actress, PLEASE KEEP IT ON!! Code Black and the NCIS shows are all I watch,except for the Hallmark movies !!

Please re think this . It’s a great show.

I love Code Black. I have from the beginning and it has only gotten better. Please do not cancel this show.

Why cancel this program? Probably not enough mayhem or grafic killings. People saving lives does not seem to be popular anymore. I enjoyed this program , sorry to find out is being cancelled

I love love love Code Black. It is the best medical drama on tv. Please do not cancel this show.

With all the junk cbs airs they cancelled their best program code black.If you must get rid of something how about programs like big brother

One of the best shows on tv and it’s being cancelled???

WHY??? I only have a few shows I watch. This is one of my favorite shows. I look forward every week to see it. Why are all the good shows cancelled, and these mindless reality shows, go on and on. My guess is, it is cheaper to use these bimbos! Please don’t cancel this show. I am running out of good shows to watch.

CBS cancels this show but brings back shows from the past that will be just as bad as some of the previews they have for new shows this season. I hope they lose their 1st place status and realize that people make the network based on ratings. They should listen to the people, not the ratings. Bring back Code Black!

This is ridiculous! You keep the stupid shows but cancel the good ones! What are you going to do when people stop watching CBS all together?? This is a Great show & shouldn’t be cancelled!!

I looked forward to Code Black since it’s inception. The love the cast and each of their respective roles within the show, they are really perfect in them. I was skeptical about Rob Lowe, but I have to say he is an excellent actor and his role brings a rogue aspect into the mix. It would be a shame to cancel this show as it is a slow burn and should only get better with time. For me it falls somewhere in-between Criminal Minds and the old show ER…. wish CBS would relook at the decision.

I CAN NOT BELIEVE THAT CBS HAS CANCELED CODE BLACK. IT SEEMS THAT EVERY TIME A “GOOD SHOW” COMES ON IT GETS CANCELED SOON AFTER. I WILL NOT WATCH ANY SHOWS ON CBS UNTIL “CODE BLACK” IS RENEWED!!!

I can’t believe they’re canceling this show. I was so excited when I saw it return. There is so much garbage on tv these days and a great show like this gets axed? Maybe many viewers that watched earlier seasons didnt know it returned. I only knew because I never turned off the record button on my dvr for this show. I hope many more people voice their displeasure with your decision.

Say it isn’t so! I am so ticked off right now! Series Finale! Good Gawd, its the best damn show on! Just say it isn’t so! If this show is canceled then I will cancel CBS all together, frankly its getting old, when you start to like a show only to have it up and cancel on you! In pleading with you, keep Code Black on!