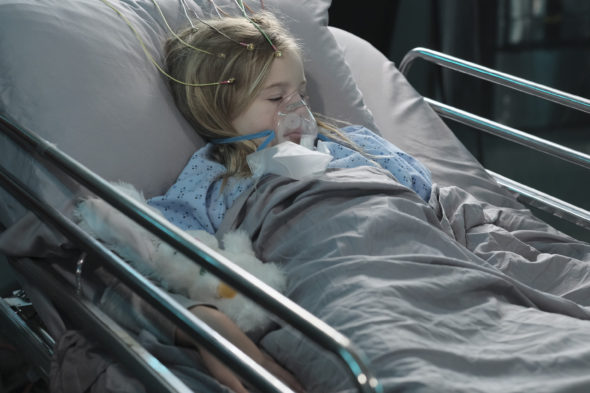 Another television series has crossed over to the great beyond. The Crossing TV show on ABC has been cancelled after one season. The thriller, which made its debut on April 3rd, premiered with low ratings, and things only got worse from there.

The Crossing: A Look at the Ratings

The first season of The Crossing is averaging a 0.69 rating in the 18-49 demographic and 4.22 million viewers. Find out how The Crossing stacks up against other ABC TV shows.

Variety has confirmed The Crossing cancellation.

What do you think? Did you enjoy the first season of The Crossing TV series? If it were up to you, would ABC have cancelled or renewed this TV show for a second season?

The show the Crossing, is a show that deals with time travel, and also social dynamics of relationships and the power vacuum if genetic advancement goes too far without control. The shows premise is interesting, ABC should give it a chance to develop without throwing it too the scrap heap, while the writing needs to develop more of a backstory without getting muttered or lost in the core relationships of the leads. A tie in too recent events in the real world as to what lead too the genetic explosion and almost a martial law type Nazi society bent on… Read more »

I cannot believe The Crossing has been cancelled. This was such a good show. I sincerely hope you reconsider and bring it back. This is one of the best shows I’ve seen in a long time. So very disappointed!!

My sentiments exactly!! This show was crazy good!!

I was really enjoying the Crossing…Great plot, Great actors. So why, ABC?

This was one of the best shows available this past season. Please reconsider!

I’m going to stop watching these new series. Every time a good series comes on, it gets canceled. Try putting it on at an earlier time.

I’m her disappointed I lived that show I couldn’t wait to see a second season. They didn’t even really give it a chance.

I thoroughly enjoyed the crossing and I was hooked, that I binged watched the show over two days. I couldn’t stop watching it! I just wanted more and please make series 2
!!

I am extremely disappointed about this series being cancelled! I had just been telling all of my family and friends how great it was yet you didn’t give it a chance. So disappointing!
Nielson needs to change who they have for their viewers! I volunteer!

Very disappointed in network TV these days. They never promote shows properly and soon as you end up loving one, you only get one season! Unacceptable! I want “The Crossing” season 2!!

Hello, I have watched The Crossing series numerous times now and am amazed at how good the plot is and how the AZ character and Reece began working together at the end. There was almost no advertising about this show but I can assure you that it was one of your best. Please reconsider running this for a second season.

PLS renew for a season 2!

PLEASE reconsider a 2nd season of The Crossing!! I couldn’t tear myself away each week! I loved it!! I hope someone picks it up for another shot at it! So upset!!

So very disappointing ABC! Two shows that could be watched by a variety of viewers. Kevin Probably Saves & The Crossing both cancelled.
In fact you cancelled The Crossing after the 3rd episode. Now how does that encourage new viewers to start watching a series?
I won’t be tuning in to watching any new shows on ABC for fear they will be cancelled.