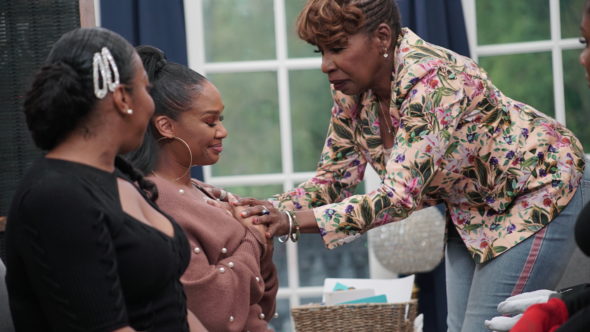 The Oprah Winfrey Network is getting ready to say goodbye to the popular and long-running Iyanla: Fix My Life TV series. The show, which began in 2012, features inspirational speaker, author, and life coach Iyanla Vanzant as she helps guests overcome various problems in their lives.

The eighth and final season of Iyanla: Fix My Life will kick off on April 10th on OWN and the show will wrap up with a two-hour special on May 22nd.

Here’s the final season announcement from OWN:

Final Episodes to Premiere April 10 with a Must-See Opener Featuring LisaRaye McCoy; Two-Hour Farewell Special to Air on May 22

Iyanla, Who Has Been with the Network for Nearly Ten Years, Has Filmed Nearly 150 Episodes of the Beloved Series

LOS ANGELES – OWN: Oprah Winfrey Network announced today that after ten years and eight seasons the award-winning hit “Iyanla: Fix My Life” will have its series finale when all-new episodes premiere Saturday, April 10 at 9 p.m. ET/PT. A two-hour farewell special will air on Saturday, May 22 at 9 p.m. ET/PT showcasing all the memorable moments and never-before-seen footage from the series.

“Iyanla: Fix My Life,” featuring six-time New York Times bestselling author, spiritual life coach, host, and executive producer Iyanla Vanzant, has recorded nearly 150 episodes and has been the highest-rated unscripted series in OWN history across all key demos. The long running series is a four-time NAACP Image Award winner for Outstanding Reality Series and Iyanla has been nominated four times as Outstanding Host in a Reality/Reality Competition or Game Show category, recently for the 2020 season of the show. During its most recent season (10/31-12/19/20), “Iyanla: Fix My Life” was Saturday night’s #1 original series across broadcast and cable with African American women.

“The minute Iyanla stepped onto the stage of ‘The Oprah Show,’ I knew she had a talent that was meant to be shared and I am glad that she created the perfect vehicle to provide OWN viewers with her healing magic,” said Oprah Winfrey. “Sunsetting the series is bittersweet. I’m very thankful for her and the work she does and look forward to what unfolds next from her gift of teaching people to be better versions of themselves.”

“We are grateful to Iyanla and her team for giving us this powerful show that has, for nearly the entire life of this network, been a favorite with our audience,” added Tina Perry, OWN president. “Viewers have related to the struggles of those seeking guidance in the darkest of times and with Iyanla’s compassionate wisdom, we’ve seen the joy of overcoming pain that leads people on a path to true happiness.”

“The time I have spent creating and working on ‘Fix My Life’ has been nothing short of phenomenal,” said Iyanla Vanzant. “In my heart of hearts, I believe that ‘Fix My Life’ has contributed to the creation of a new genre of television programming, where people get to speak and see how to address issues that have been taboo. To have a network, a production team and a crew that could stand in and participate in the manifestation of this vision has been humbling and most rewarding. My prayer is that ‘Fix My Life’ will be standard for others who have the vision and courage to bring personal healing work to the television screen.”

In dramatic new episodes (check out the first-look trailer HERE), Iyanla helps those who are struggling, guiding them toward a new way of living and encouraging them to do the work necessary for real change. Through emotional heart-to-heart conversations and often a dose of tough-love, Iyanla helps individuals confront unresolved issues that are causing turmoil. She coaches guests and gives them the tools to fix their own lives, seeking to break the negative patterns. The new season opens with a dramatic intervention when actress LisaRaye McCoy (“The Family Business”, “All of Us”) returns to Iyanla to complete the work that she started on her last visit. Iyanla answers the call to counsel LisaRaye who is finally ready to tackle the underlying issues within herself.

The final episode descriptions below:

(P) Saturday, April 10 (9 p.m. – 10 p.m. ET/PT) – Episode: LisaRaye McCoy: Queen of De-Nial (711)
Actress LisaRaye McCoy returns to complete the work that she started on her last visit. This time around, however, rather than healing the relationships with her mother and daughter, she is looking to address the breakdown within herself.

(P) Saturday, April 17 (9 p.m. – 10 p.m. ET/PT) – Episode: My Marriage Is None of Our Business (709)
A couple who co-own a business together and share eleven children between them find themselves at a crisis point in their marriage. While he has one foot out the door, she is still hopeful that their union (and their livelihood) can be saved.

(F) Saturday, April 24 (9 p.m. – 10 p.m. ET/PT) – Episode: 99 Problems and the Corona is One (710)
A family with adult children feels disconnected and frustrated after being quarantined together during Covid. They quickly discover, however, that their issues with communication and co-dependency have existed long before the threat of any virus.

(P) Saturday, May 1 (9 p.m. – 11 p.m. ET/PT) – Episode: Dirty Laundry and Unfinished Business (714)
The Giles family is back again with more unfinished business. This time, Marc’s eldest son joins to settle a score with his dad, his youngest daughter confronts the grandmother who doesn’t like her, and his youngest son makes a run for it.

(P) Saturday, May 8 (9 p.m. – 11 p.m. ET/PT) – Episode: Taking Care of Business, Losing in Love (712)
Four female friends who are at the top of their game in their careers seek Iyanla’s help to figure out why their romantic relationships always seem to fail. They soon discover that old wounds from the past are creating blocks for the future.

(P) Saturday, May 15 (9 p.m. – 11 p.m. ET/PT) – Episode: An Open Letter to All Black Men (713)
A widowed father struggles to stop his two sons’ reckless behavior, whose actions while grieving their mother’s death threaten to send these young men straight down the prison pipeline, causing Iyanla to call in Dr. Steve Perry for reinforcements.

About Bunim/Murray Productions
Bunim/Murray Productions (BMP) is the leading producer of innovative entertainment content. The Emmy Award-winning company is widely credited with creating the reality television genre with its hit series The Real World, which had moved to Facebook after 32 seasons on MTV. BMP continued to innovate with the first reality game show, Road Rules (MTV), in 1995; the first reality sitcom, The Simple Life (E!), in 2003; and the first reality soap opera, Starting Over, in 2003. BMP’s current programming includes Keeping up with the Kardashians, Total Bellas (E!), The Challenge (MTV), Born This Way (A&E), Kim Kardashian West: The Justice Project(Oxygen), Ball in the Family (Facebook Watch), Endless (Snapchat), Miz and Mrs. (USA Network), Family or Fiance, Iyanla Fix My Life (OWN), Crystal Maze (Nickelodeon) and Emily’s Wonder Lab (Netflix). BMP, through BMP Films, has also produced Transhood (HBO) They Call Us Monsters (PBS), Valentine Road (HBO), Pedro (MTV) and the Emmy Award-winning Autism: The Musical and Autism: The Sequel (HBO). Based in Glendale, CA, the company was founded in 1987 by Jonathan Murray and the late Mary-Ellis Bunim, who were inducted into the Television Academy’s Hall of Fame in 2012. Bunim/Murray Productions is a division of Banijay, the world’s largest international content producer and distributor.

What do you think? Have you enjoyed the Iyanla TV series? Are you disappointed that the show is ending or, do you think the time is right?

I am so sorry to see her go. I hope she has more plans to help people in some way. She definitely helps people even if they are not on her show. It is relatable material that happens every day in families. So sad!

Sorry to see this leave. I will hope to see Iyanla again in a different format.