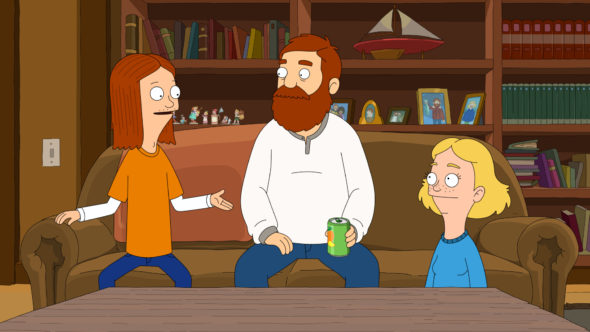 This family’s devotion to each other continues in the third season of the The Great North TV show on FOX? As we all know, the Nielsen ratings typically play a big role in determining whether a series like The Great North is cancelled or renewed for season four. Unfortunately, most of us do not live in Nielsen households. Because many viewers feel frustrated when their viewing habits and opinions aren’t considered, we invite you to rate all of the third season episodes of The Great North here.

A FOX animated family comedy series, The Great North TV show stars Nick Offerman, Jenny Slate, Will Forte, Paul Rust, Aparna Nancherla, Dulce Sloan, Megan Mullally, and Alanis Morissette. The TV show follows the adventures of the Tobin family in Alaska. A single dad, Beef Tobin (Offerman) does his best to keep his weird bunch of kids close, especially his only daughter, Judy (Slate). Her artistic dreams lead her away from the family fishing boat and into the glamorous world of the local mall. The family also includes oldest brother Wolf (Forte) and his bride, Honeybee (Sloan); middle brother Ham (Rust); and Moon (Nancherla), the 10-year-old-going-on-50 little brother. While their mother is not in the picture, Judy seeks guidance from her new boss, Alyson (Mullally), and her imaginary friend, singer Alanis Morissette (Morissette), who appears to her in the Northern Lights.

What do you think? Which season three episodes of the The Great North TV series do you rate as wonderful, terrible, or somewhere between? Are you glad that The Great North has been renewed for a fourth season on FOX?

r you have an awesome