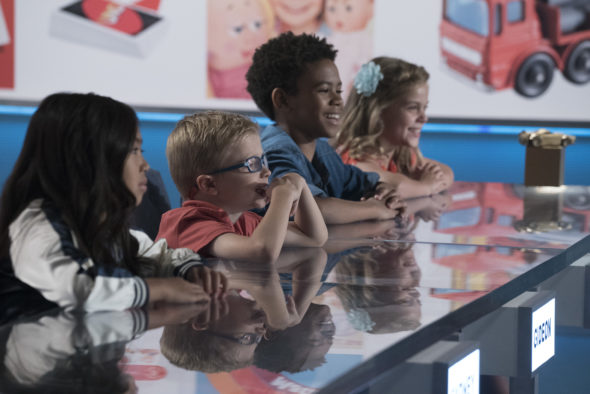 Do the new kid-judges get down to the serious business of playing around, in the second season of The Toy Box TV show on ABC? As we all know, the Nielsen ratings typically play a big role in determining whether a TV show like The Toy Box is cancelled or renewed for season three. Unfortunately, most of us do not live in Nielsen households. Because many viewers feel frustration when their viewing habits and opinions aren’t considered, we’d like to offer you the chance to rate all the season two episodes of The Toy Box for us here.

In the second season, there is a rotating panel of five kid-judges per episode. The winner from each week will move on to the finale. The grand prize winner’s toy will be made by Mattel; sold exclusively at Toys”R”Us stores nationwide and on Toysrus.com, where it joins last season’s winner, ArtSplash; and will receive a cash prize of $100,000.

What do you think? Which season two episodes of The Toy Box TV series do you rate as wonderful, terrible, or somewhere between? Should ABC cancel or renew The Toy Box  for a third season? Don’t forget to vote, and share your thoughts, below.

My kids LOVE this show! The judges are hilarious and brutally honest in the way only kids can be. It has sparked their interest in being toy inventors and I hope it stays on for many seasons to come.

I love this show. The children have to choose between several options and give a valid reason why. Children at home are picking their chose. I love they are having to think, using their brains, plus coversation and discussion. No Google. I love this show for that reason. They are serious and at times funny, but after all this is business. Please leave this show on the air. A plus, it is clean, not many of those left.

This show reeks of commercialism and lacks unscripted fun and/or joy. I love kids but these kids seem to be actors and playing to the camera. Boring.